Essay is part of a new collection in bookstores today. 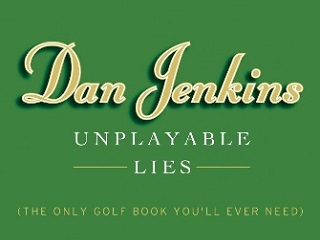 Half the essays in Dan Jenkins’ new book Unplayable Lies, out today, are new. The rest are updated versions of articles originally published in Golf Digest.

The excerpt being used to promote the book is titled “How I Met the Ultimate Hustler.” It’s all about Thomas “Titanic” Thompson, a Texas golf legend who wound his way to Hollywood and beyond.

Jenkins explains how Thompson got the nickname, details an in-person encounter with the hustler at age 77, and revisits the most famous Titanic tale of them all:

The match between Titanic and Byron Nelson wasn’t covered by the press and was never written about, but it became a part of Fort Worth golf history. They played an 18-hole match for $1,000 – winner take all – in 1931 at Ridglea on the west side of town. Ridglea was a public course then, but since 1954 it has been a country club of prominence.

One thousand was big money in those days. It would be the equivalent of $14,000 today in terms of buying power.

Ti was in town, and all of the public courses were gambling haunts back then. He dropped by Ridglea and let it be known that he wanted to play “the best man in town.” Word reached a member at Glen Garden Country Club, where Byron was a junior member. This was a year before he turned pro. Byron was the best amateur around the area then. The member at Glen Garden liked games of chance and rounded up two other investors to back Nelson in the match.

Thompson, who passed away in 1974, had a slightly different recollection of the final match score than Nelson. Unplayable Lies, without a doubt, will be gifted to many duffers this coming Father’s Day.