The portion of T magazine’s interview with Quentin Tarantino that websites are likely to run with involves, funnily enough, someone else’s movie. 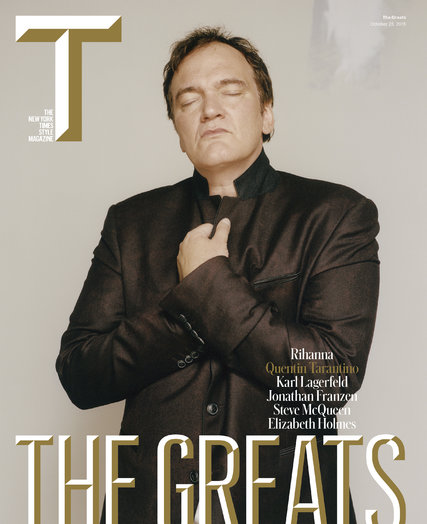 Bret Easton Ellis brings up the 2015 Oscars, prompting QT to weigh in on Selma:

We touch on the supposed Oscar snubbing of Ava DuVernay’s Martin Luther King movie ‘‘Selma,’’ which caused a kind of national sentimental-narrative outrage, compounded by the events in Ferguson, and which branded the Academy voters as old and out-of-it racists — despite the fact that ‘‘12 Years a Slave’’ had won Best Picture the year before. Tarantino shrugs diplomatically: ‘‘She did a really good job on ‘Selma’ but ‘Selma’ deserved an Emmy.’’

More intriguing in the Oct. 25 issue are Tarantino’s remarks about the many think pieces written by black critics when Django Unchained was released. “It’s been a long time since the subject of a writer’s skin was mentioned as often as mine,” Tarantino suggests.

The piece ends in perfect and very fun fashion, with Ellis and Tarantino hopping into the latter’s car and driving from the Hollywood Hills down to the writer-director’s repertory cinema on Beverly Boulevard, for a Chaplin double bill. Ellis used to haunt the place when it was under different ownership, but that visit is the first time he returned since those days.

P.S. There are six different covers for “The Greats” issue, which will be randomly distributed. Each issue however will include a page inside showing all six treatments of Tarantino, Rihanna, Jonathan Franzen, Karl Lagerfeld, Elizabeth Holmes and Steve McQueen. In terms of composition, the Franzen one definitely stands out.

Update (October 14):
Picking up on his own Facebook post, Tarantino emailed Indiewire’s Anne Thompson to clarify that a TV designation for Selma is by no means an insult:

The quote from the NY Times piece about Selma is wrong. I never saw Selma. If you look at the article, it was Bret who was talking about Selma, not me. I did say the line “it deserved a Emmy,” but… when I said it, it was more like a question.

Which basically meant, “it’s like a TV movie?” Which Bret and myself being from the same TV generation, was not only understood, but there was no slam intended. Both Bret and myself come from the seventies and eighties when there were a lot of historically based TV movies… Does “Selma” look like a seventies TV movie? Yes. Does it play like one, I don’t know, I haven’t seen it.