The Best- and Worst-Selling Magazine Covers of 2015 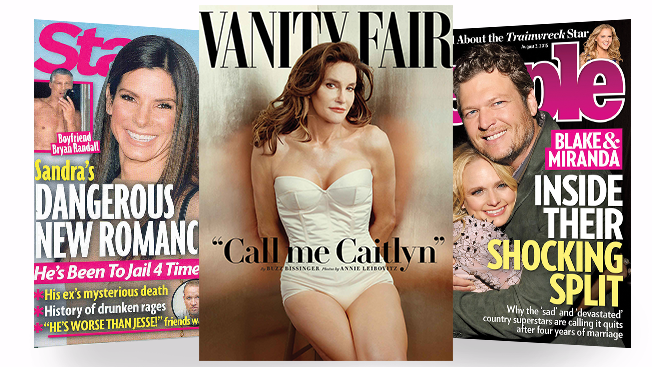 As magazine newsstand sales continued on their decline in 2015—dropping 12 percent year over year in the third quarter alone, per MagNet—publishers endeavored to produce covers worth pulling off the shelves. While a handful of celebrities both buzzy (Caitlyn Jenner, Miranda Lambert) and tried-and-true (Jennifer Aniston, Brad and Angelina) sparked readers' interest, others fared less well. Here, we take a look at the year's hits and misses.

Newsstand sales: 400,000
Unsurprisingly, Caitlyn Jenner was newsstand gold in 2015. In addition to selling more than 400,000 copies of Vanity Fair's blockbuster July issue (the magazine's newsstand average for the first half of the year was just 164,000), she covered top-performing issues of Us Weekly and In Touch.

Newsstand sales: 262,100
Perennial newsstand favorite Jennifer Aniston proved she's still got it. Despite a lack of notable acting projects, she pulled in big numbers for titles like Life & Style Weekly, Star and Allure.

Newsstand sales: 438,000
Sarah Jessica Parker may still be a fashion favorite, but female readers weren't feeling the love for the former Sex and the City star. Her covers for both Cosmopolitan (which typically sold around 500,000 issues in the first half of 2015) and Bazaar sold fewer copies than average.

Newsstand sales: 162,500
Fortysomething actresses not named Jennifer or Angelina had a tough time selling magazines in 2015. Sandra Bullock was the year's worst seller for both Star and Life & Style, while Ok!'s lowest-performing issue featured Sofia Vergara and Cameron Diaz.

Newsstand sales: 173,000
While family members Caitlyn and Kendall Jenner made headlines (and sold magazines), Kim Kardashian's newsstand powers were on the decline. Her Life & Style and Star covers were among the year's worst sellers.

Newsstand sales: 450,233
Being the world's most powerful religious leader doesn't necessarily translate into the power to sell covers, as evidenced by People's poorest-performing issue of 2015. The magazine's other lowest-sellers featured Joan Collins and Blake Lively.