A Powerful Speech by Meryl Streep, and a Round of Twitter Outrage 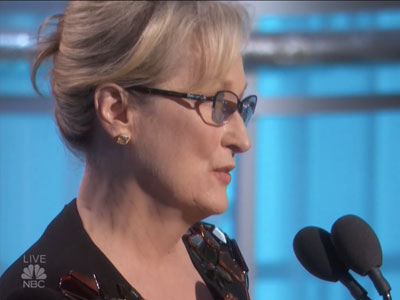 She did not say his name once; she didn’t have to. The subject of Meryl Streep‘s Cecil B. DeMille Award acceptance speech at the Golden Globes last night was clear: Donald J. Trump.

“You and all of us in this room, really, belong to the most vilified segments in American society right now. Think about it. Hollywood, foreigners and the press,” she said, referencing three groups who had all had guest spots during the election, and after, as the subject of Trump’s ire in rallies and tweets.

And if it wasn’t clear then, the reference solidified later in her speech, after she highlighted a few representative stories of the diversity of life experiences of those gathered in the room, after she defined the art of acting as an exercise in empathy.

“There was one performance this year that stunned me. It sank its hooks in my heart,” she said, continuing:

Not because it was good. There was nothing good about it. But it was effective and it did its job. It made its intended audience laugh and show their teeth. It was that moment when the person asking to sit in the most respected seat in our country imitated a disabled reporter. Someone he outranked in privilege, power and the capacity to fight back. It kind of broke my heart when I saw it. I still can’t get it out of my head because it wasn’t in a movie. It was real life.

And this instinct to humiliate, when it’s modeled by someone in the public platform, by someone powerful, it filters down into everybody’s life, ’cause it kind of gives permission for other people to do the same thing.

Disrespect invites disrespect. Violence incites violence. And when the powerful use their position to bully others, we all lose.

Streep would bring up the press again, calling on the “principled press to hold power to account” and calling on Hollywood to support press freedom advocacy group the Committee to Protect Journalists.

She ended with a quote from “my friend the dear departed Princess Leia,” referencing the actress Carrie Fisher, who had told her “Take your broken heart, make it into art.”

And while the second screen has become a requisite companion to awards show viewing, this time it may have been better if we went without.

The inspiring moment, a reminder of the long history of art and artists who use their platform as a check against exploitative power, quickly dissipated into a round of right-wing outrage and clap-backs on Twitter, particularly to tweets from TheBlaze host Tomi Lahren and Fox News Channel host Meghan McCain.

.@TomiLahren "These Hollywood elites wouldn't know average, every day hard-working Americans if we bit them in the ass. #GoldenGlobes" pic.twitter.com/eCWJeCw4Rq

@MeghanMcCain so you're okay with mocking and imitating disabled journalists? Good to know.

y'all tell us to "get over it" every time you roll back our rights and every time we bring up our struggles. this was a speech. you'll live.

A person who goes on TV for a living used the word "we" in this sentence. pic.twitter.com/OTMYjnWuZq

"stay tuned to our multiple tv, radio, print, and online outlets as we express outrage about someone using a platform to have an opinion"

Celebrities can be tedious. But if you're more upset about Streep's speech than the behavior that prompted it, maybe reassess your values.