From the Lower East Side, shout outs for Most Offensive Media Personality and more. 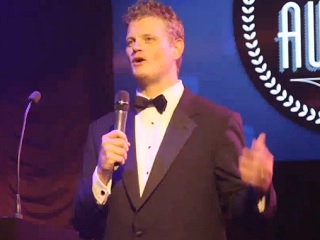 Not long after yesterday morning’s announcement of nominations for the 2016 Prime Time Emmy Awards, another celebration of that sort was held. Hosted by Drew Magery (pictured) at a Lower East Side location, the inaugural 2016 Deadspin Awards spanned 13 categories.

Magery wrote a piece last year taking the St. Louis Cardinals to task for hacking into the Houston Astros database. Those actions garnered the MLB franchise a Worst Team nod.

Meanwhile, perhaps incoming First Take host Max Kellerman, who starts later this month on ESPN2 alongside Stephen A. Smith, can ask his colleague whether there is any pride in winning Deadspin’s Most Offensive Media Personality prize. Since these days it’s not so much how attention is garnered but more so just how much of it was tallied, we imagine Smith would tell Kellerman, if asked, that he’ll take it.

The Smith kudo, put to a vote in late June, was in fact the first award of the night and was presented by the site’s founding alum Will Leitch. During those remarks, Leitch remembered being hit up via email by Jason Whitlock during the earliest days of the Gawker Media property for a possible job. Smith in his category beat out Colin Cowherd, Jim Nantz, Phil Mushnick and Chris Broussard.

For some strange reason, Daniel Radcliffe was chosen to announce the winner of Worst Tweet, by way of pre-taped video. Is the actor a fan of American professional sports? Does it matter? Maybe, and no. Full list of winners here.