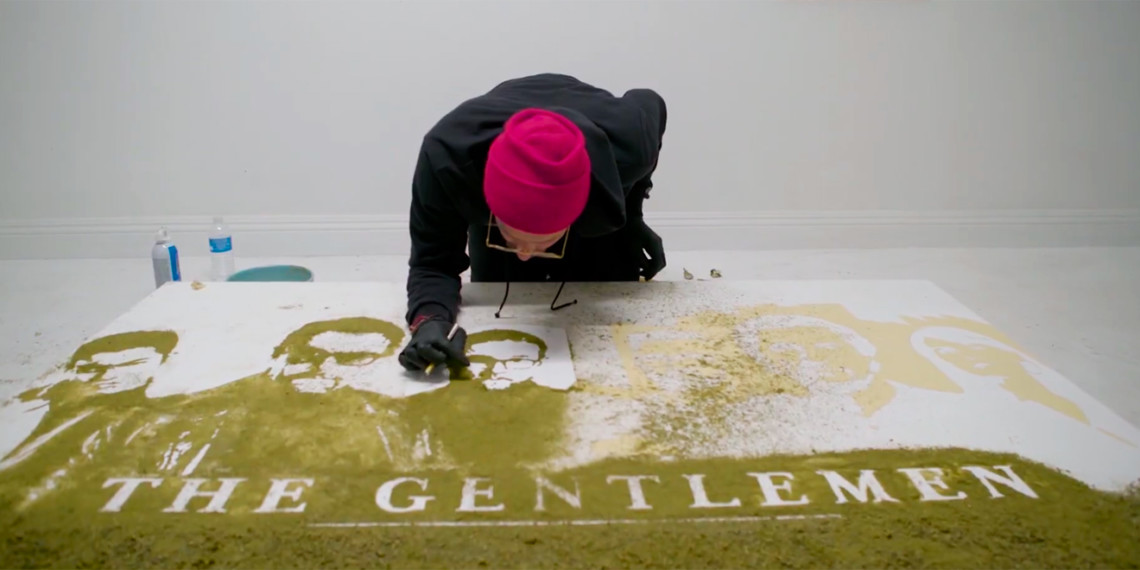 Artist Zach “Jesushands” Fernandez converts each piece of the cannabis plant into elements of his poster for The Gentleman. STX Entertainment

The Gentlemen, a pulpy crime caper from Guy Ritchie, is “a film about weed—growing it, selling it, stealing it, appreciating it as more than a casual high,” according to one reviewer.

It’s fitting, then, that the flick would lean into cannabis as a promotional tool. But its marketers have taken that idea quite a step further, creating a first-of-its-kind movie poster made entirely of cannabis, using the bud, leaves, stems and every other part of the plant.

Measuring 6 feet by 4 feet, the artwork has been on a tour of sorts ahead of the action movie’s Friday debut, stopping at Weedcon and an influencer and media dinner. It may end up as an installation at an Alamo Drafthouse Cinema.

Whether the stunt will put butts in multiplex seats remains to be seen, but the poster has been an attention grabber so far. Could that be because it’s so, well, potent?

“Wherever we take it, the smell is like a cloud trailing behind us,” says Andrew Stachler, CEO of Max Stax, the independent digital agency in Los Angeles that worked with multimedia artist Zach “Jesushands” Fernandez on the project for STX Entertainment.

Fernandez, who famously converted the Hollywood sign to say “Hollyweed” in 2017, says in an accompanying video that he’s never before used cannabis as a medium for his art. For this experimental gig, he recreated the film’s hero image, a stark portrait of A-list stars like Matthew McConaughey, Henry Golding, Colin Farrell, Charlie Hunnam and Michelle Dockery.

Critics aren’t quite as bowled over by it as they were by now-classic fare like Snatch and Lock, Stock and Two Smoking Barrels. But the reviewer for Collider offers a middle ground, deeming the film “specifically made to be watched in an altered state.”

Moviegoers, that ball is now in your court.