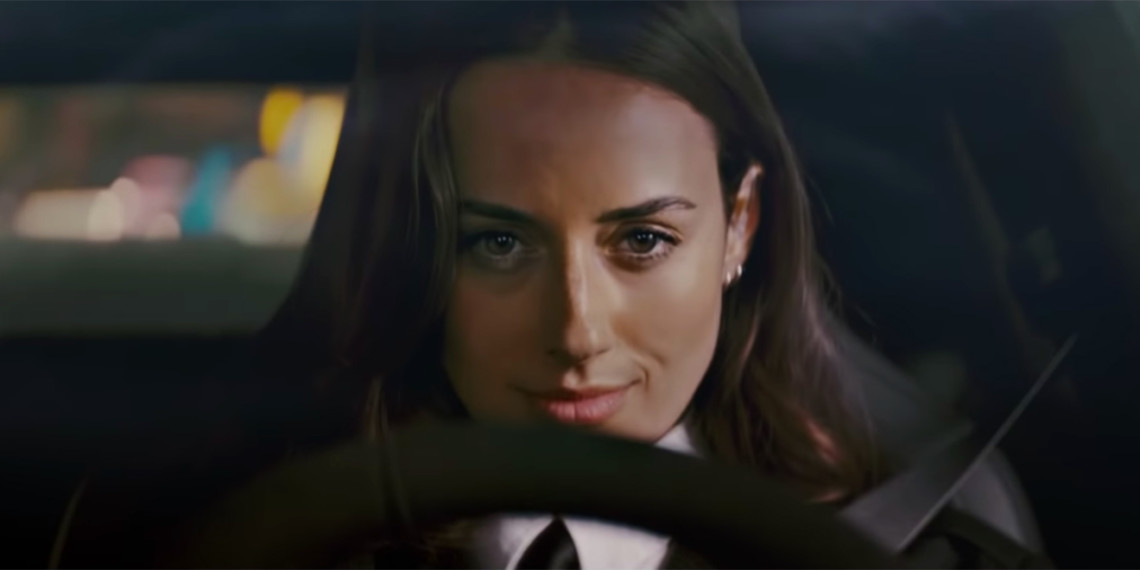 Porsche energized its image with a fun spot about a heist involving its new electric vehicle. Porsche

Another Super Bowl is in the books, and now we find out which ads people will actually still be talking about now that the anticipation is over.

It wasn’t the strongest year, with few truly iconic pieces of creative, but there were still quite a few gems in the muddled mix of A-list cameos and emotional entreaties.

When you’re a paragon of physical perfection, you generally don’t need to do much more in a Super Bowl ad than be beautiful and, optionally, smile at the camera. But Jason Momoa shows he’s not above poking fun at himself in “Comfortable,” his ad for Rocket Mortgage from Chicago agency Highdive. It’s a surreal, rather disturbing spot, and the product connection is tenuous. But it’s still one of the spots most likely to be discussed and debated at work on Monday.

What seems to be a car theft from the Porsche Museum in Germany goes in some unpredictable and charming directions in this joyride of a spot from Chicago’s Cramer-Krasselt. Porsche hasn’t always been the most lighthearted brand, and its gravitas has sometimes kept the automaker from feeling as fresh or relevant as competitors like Audi. Add the fact that the spot promotes the new electric Taycan, which makes for a great opening moment of silent creeping, and the ad might go a long way toward boosting Porsche’s place in the pantheon of luxury cars that still feel to be in their prime.

8. Microsoft: “Be the One: Katie Sowers”
Agency: McCann New York

While the game definitely didn’t go the way Katie Sowers, offensive assistant coach for the San Francisco 49ers, would have wanted, her story will likely continue to resonate with viewers who saw Microsoft’s ad about her lifelong passion for football and many accomplishments. As both the first female coach and first openly gay coach in the Super Bowl, Sowers was arguably the night’s most pioneering figure. Microsoft made the right call in choosing to devote its ad space to her accomplishments and inspiring message while still incorporating her use of the Microsoft Surface Pro 7 tablet without detracting from her moment in the spotlight.

Tide pioneered the approach of weaving one ad storyline into multiple ad breaks with 2018’s “It’s a Tide Ad,” but then notably took last year off from the Big Game. This year, the brand was back, with Charlie Day of It’s Always Sunny in Philadelphia taking the reins from David Harbour. Told to wait on cleaning his shirt that got stained right at the beginning of the game, Day spirals into an existential crisis about the definition of “later,” spilling over into a promo for The Masked Singer, carousing with the Bud Knight and even crossing paths with Wonder Woman. Day’s frenetic charisma made the journey a fun one, even if it wasn’t quite the narrative innovation we’d hoped to see after the brand’s 2018 ads set the bar.

The Shining, but make it funny. Mtn Dew Zero Sugar nailed it with this perfectly cast and meticulously recreated homage to the 1980 horror film. Breaking Bad’s Bryan Cranston and Black-ish star Tracee Ellis Ross starred in the ad, which somehow manages to turn a terrifying film into a hilarious soda ad while barely changing a thing. And while most ads in this vein would be hard-pressed to pay off the premise in a way that makes sense, “As good as the original, maybe even better” ties it all together with a perfect piece of copy.

This one was polarizing, on social media and in the Adweek newsroom. But BBDO New York deserves credit for creating one of the more preposterous concepts of the night and having it pay off in a goofy, well-crafted way that’s also a tongue-in-cheek homage to Coca-Cola’s classic “Hilltop.” If the idea of a giant Snickers being dropped into an abyss as an offering to some unspoken deity isn’t at least mildly entertaining to you, then this Super Bowl likely didn’t have much to offer anywhere else.

This year’s Super Bowl ads were rife, as always, with concepts that packed in multiple celebrities. But Hyundai dialed down the chaos found in most other spots and instead let John Krasinski, Rachel Dratch and Chris Evans just have some fun with the Boston accent. It’s a simple premise with some fun payoffs, and viewers will definitely remember the product’s self-parking feature.

Amazon’s been a crowdpleaser in the Super Bowl for the past two years, and 2020’s outing saw the brand switch from hot U.K. shop Lucky Generals to Droga5 London. Anchored by real-life couple Ellen DeGeneres and Portia de Rossi, the spot imagines an impossibly distant history in which we couldn’t ask Alexa to do things. The ad’s scenes play off the self-awarely silly premise with some dry humor and good laughs. It’s the biggest work to date from Accenture-owned Droga5’s only office outside the U.S., which likely earned the shot through its work for Amazon Prime Video UK.

The biggest tearjerker of the night, bar none. Google used creative storytelling through the lens of its own product, creating a powerful story of enduring love in which we never even see the man sharing his touching memories of his wife. Much of the ad is left open to interpretation. Is it about proactively managing Alzheimer’s to keep the memories alive, or simply an act of creating a digital memory book? Regardless, its emotional impact is potent, and it takes the dry interface of technology into a deeply personal place.

In a year of seemingly endless movie references, one Super Bowl ad stood far above them all. Jeep accomplished the impossible in more ways than one. First, in getting Bill Murray to break his lifetime abstinence from ads, and second in doing justice by one of the actor’s most beloved roles. Perfectly timed to air on Groundhog Day, the spot is exquisitely crafted and serves as a reunion with co-stars Brian Doyle-Murray (Bill’s brother, who plays the mayor of Punxsutawney) and Stephen Tobolowsky (“Needlenose” Ned Ryerson). The ad perfectly positions the Jeep Gladiator so it never gets lost in the distractingly lovable story. Amid a crowd of Super Bowl ads that were often divisive or shrug-worthy, this is one that’s a delight for casual viewers and nerdy lovers of ad craft alike.