He also had a cameo in this year's Super Bowl 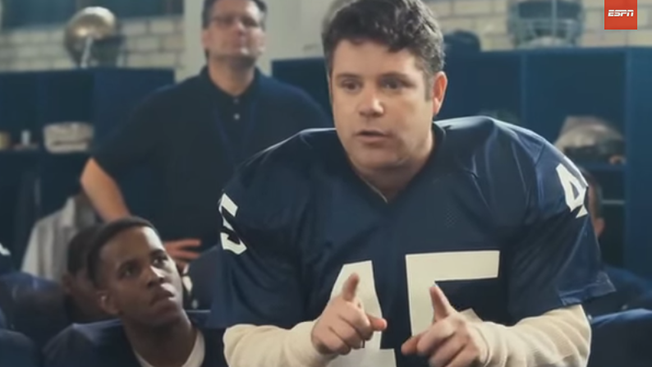 A college championship that’s both national and rational has long been the dream of American football fans. In fact, Rudy dreamed up the solution 40 years ago, according to this fun bit of alternate history from ESPN.

Sean Astin reprises his 1993 role as Notre Dame’s plucky 1970s walk-on Daniel “Rudy” Ruettiger in an ad created by Wieden + Kennedy New York to highlight ESPN’s coverage of the College Football Playoff system debuting in the 2014-15 season. For now, the sports network is mostly focused on just helping casual fans make sense of how the whole thing will work.

Oddly enough, this is the second time Astin has returned to playing Rudy in 2014. His cameo was definitely the highlight of CarMax’s “Slow Clap” Super Bowl ad.

We asked Wieden + Kennedy New York if this second Rudy reprisal was just a coincidence, and a spokesperson sent along this statement:

“So we thought he should usher in this new and exciting era. The fact that Sean Astin was recently in another spot this year was only brought to our attention after the idea was concepted.”

The real question, of course, is which brand will talk him into reenacting a rousing Goonies monologue. Down here it’s our time. It’s our time down here.