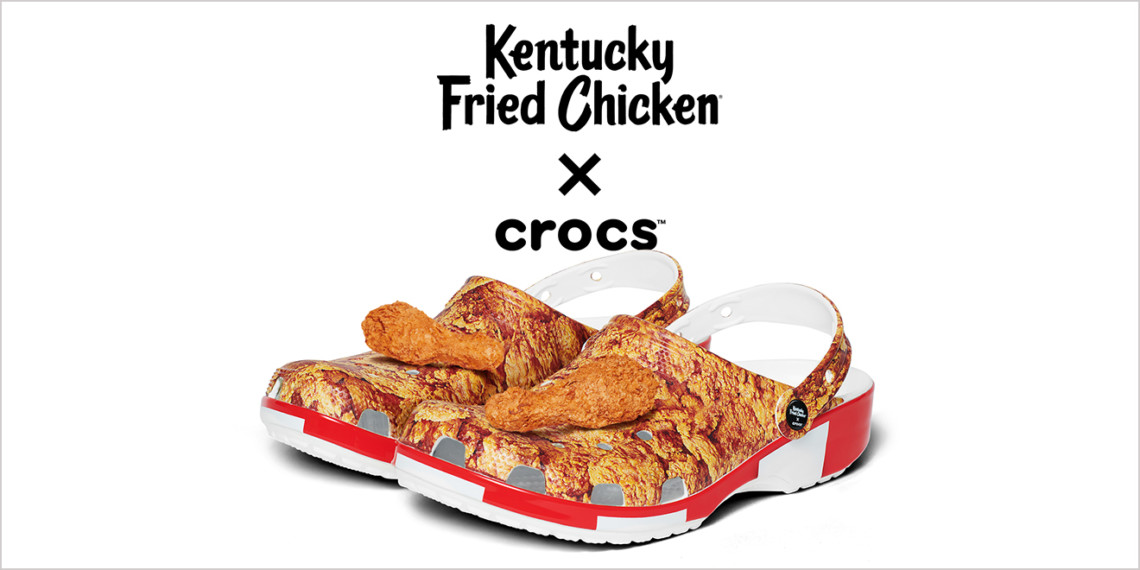 Who's up for some finger-lickin'...footwear? KFC

If you were hoping someone would ask you “Do I smell chicken?” alongside “Where did you get your shoes?”, then Crocs finally has the footwear for you. In partnership with KFC, the brand is releasing two new, co-branded versions of its clogs—including one with removable, chicken-scented Jibbitz charms that look like drumsticks.

The limited-edition, fried chicken-inspired Crocs, developed by Wieden + Kennedy Portland, made their debut Tuesday night at New York Fashion Week. While Balenciaga unveiled a pair of platform crocs during Paris Fashion Week back in October 2017, the luxury fashion house wasn’t quite bold enough to slather some finger-lickin’ goodness on them.

“Combining the unmistakable look of our world-famous fried chicken and signature KFC bucket, with the unparalleled comfort and style of Crocs, these shoes are what fried chicken footwear dreams are made of,” said Andrea Zahumensky, CMO of KFC U.S.

The “Kentucky Fried Chicken X Crocs Bucket Clog” was modeled by artist Me Love Me a Lot (aka MLMA) during Fashion Week. The Korean artist and rapper went viral back in 2017 for drawing wavy eyebrows on her face and now has 1.2 million followers on Instagram. No word on how linear her brows will be moving forward, but one thing is certain: her KFC Crocs have a 4.5-inch platform.

MLMA played double duty by modeling and acting in a new ad for the fried chicken Crocs. She transformed into a KFC employee—although most likely not complying with uniform standards—working the fryer when a new order comes in. Wieden + Kennedy put its magic into the spot and built a lot of tension in 15 seconds as viewers wait to see what will be lifted out of the fryer.

Lovers of food and footwear fusion won’t be able to buy the platform KFC Crocs but can drop $59.99 for the crunchy classic pair.

“As Crocs continues to create new, unexpected brand collaborations, we’re thrilled with this ‘bucket list’ partnership with Kentucky Fried Chicken that will bring fans an unbelievably fun and fashionable take on our classic clog,” said Terence Reilly, Crocs svp and CMO. “We’re honored to feature this fashion-forward style between two iconic American brands at one of New York’s biggest weeks in fashion that promises to surprise and delight consumers around the globe.”

Around the world, KFC has launched several products over the years that capitalize on the famous red-lined buckets and the immortal Colonel Sanders.

Last Christmas, the chain began selling its “11 Herbs & Spices Firelogs” (with the help of PR and marketing firm Edelman) for $18.99 after the previous year’s stunt sold out in three hours. They have also hawked KFC bucket hats, gravy-scented candles and chicken-scented sunscreen.