The freelance hub offers freedom, but some see a hamster wheel 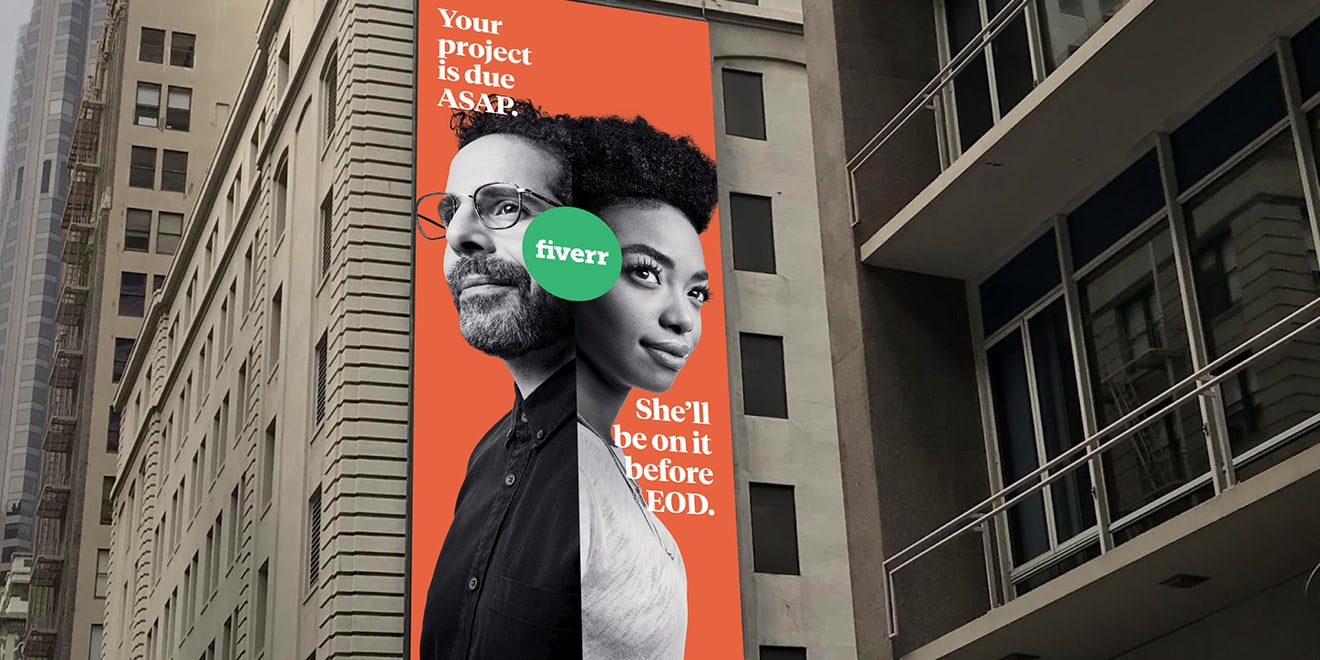 One of freelance marketplace Fiverr's new ads sparked debate for what some felt was a message of exploitation.
Fiverr
Share
By Gabriel Beltrone
|
January 16, 2019
Share

Fiverr just can’t seem to get its marketing right—try as it might.

Despite hiring a new agency, Mekanism, and this year launching a new campaign following backlash over its portrayal of freelancers as gleefully overworked, the online marketplace for the gig economy has again drawn ire for some of its latest outdoor ads.

The left side of a billboard features a middle-aged man gazing upwards with a slight smile on his face. “Your project is due ASAP,” reads the copy. The right side features a young black woman gazing in the opposite direction, similarly satisfied. “She’ll be on it before EOD.”

The intended message: He has a job that needs doing. She has the skills to do it. They both win.

Not everybody sees it that way, though.

“Are you a man who has built their career on taking credit for the work of younger women of color who get paid less than you? Now there’s an app for that!” wrote Julia Carrie Wong, senior technology reporter at The Guardian, in a Twitter quip that earned more that 5,000 retweets and 20,000 likes.

Are you a man who has built their career on taking credit for the work of younger women of color who get paid less than you? Now there’s an app for that! pic.twitter.com/DziGXqPj8l

That sparked a fresh round of online debate about the company, its messaging, and its very business model.

“I don’t understand how this could have happened,” reads one popular and scathingly sarcastic response to Wong’s post. “They had this vetted by both white dudes and other, whiter dudes.”

Other ads in the same campaign feature a diverse cast of characters, including women—and at least one woman of color—in positions of power. But the formula quickly becomes problematic when ads show men benefitting from the affordable rates and midnight-oil hours of female freelancers.

The most recent controversy highlights a deeper dissatisfaction that often arises with Fiverr and other sites that fuel the gig economy. Some feel the company’s approach perpetuates a hamster-wheel reality of working multiple jobs without a livable wage or benefits.

“Feels like their marketing has always been pretty shamelessly exploitative,” wrote another response to Wong’s tweet. Replied a third, “By ‘marketing,’ do you mean business model?” 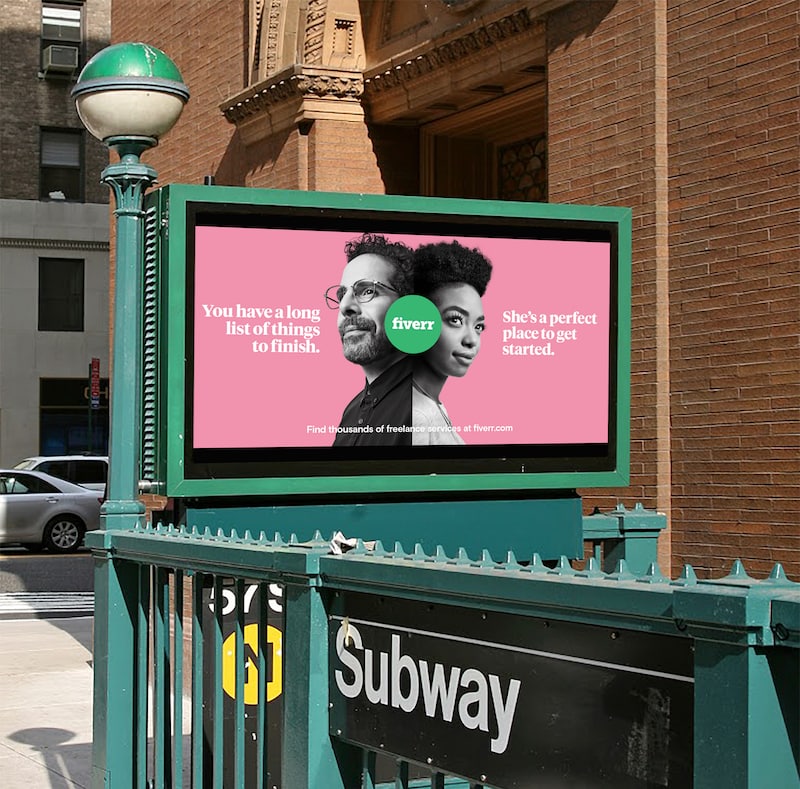 Responding to the most recent debate around its ads, Fiverr released a statement highlighting the fact that the campaign features actual users of the site, and a “breadth of stories and inclusion represented in each individual piece of creative.”

“Fiverr was founded on the concept of global collaboration,” reads the statement. “Our ‘Connections’ campaign was built to shed light on the innovative and authentic connections established on our platform.

“Each piece of creative depicts real Fiverr community members who volunteered to participate in the campaign. Our diverse community brings together people from over 190 countries; the campaign is a celebration of that.” 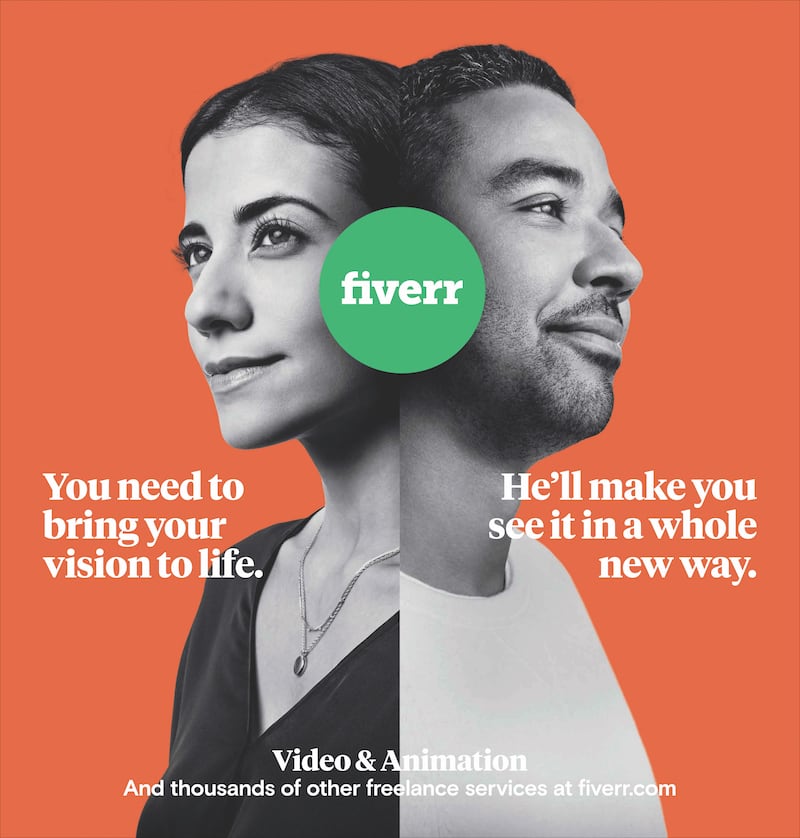 While Fiverr is likely to spend a bit more time thinking about the dynamics of race and gender in its ads moving forward, the company also seems like it will, regardless of specific messaging, continue to stoke backlash over its role in a gig economy that critics feel keeps rates low and hours long for the sake of a client’s corporate profits.

In 2017, another Fiverr ad drew snark and mild existential dread for its seemingly gleeful depiction of working impossible hours to make ends meet:

The "gig economy" is literally killing us.

Most depressing ad of the day goes to: @fiverr ???? pic.twitter.com/xq0sxsL55t

No less than The New Yorker described that ad execution as an example of how “the gig economy celebrates working yourself to death.”