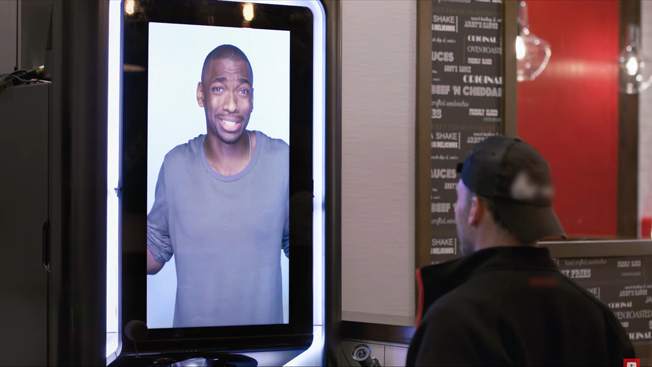 Customers at Arby's new Times Square location recently got a big surprise when they went to refill their sodas: an impromptu performance from Saturday Night Live's Jay Pharoah.

The SNL star, who has appeared in his share of satirical ads, quite literally popped up behind the screen of Pepsi's Spire dispenser to entertain unsuspecting customers in a stunt produced by Pepsi's agency partner Mekanism (which also created the fan-made intro to Beyoncé's Super Bowl XVLII halftime show).

The event was part of a larger push by PepsiCo to introduce the public to its interactive Spire, the "next-generation soda fountain" it launched in 2014.

"I heard about the project," Pharoah told Adweek, "and was like, 'It's just me messing with people?' I love doing that, so I agreed."

A camera on top of the soda machine allowed Pharoah to interact with customers from the comfort of a studio.

"They gave me wigs and things," he said. "I just freestyled, and we got some good footage."

Pharoah said the act of making a real ad wasn't unlike shooting spoofs for SNL. "I was just doing characters," he said. "It's basically the same thing for me."

"We've been rolling [Spire] out to a number of customers throughout the country," Kaplan said. "Arby's is one of our crucial customers, and [we knew] it would be a great place to showcase Spire and generate some buzz with Jay."

Pepsi chose to promote Spire with a stunt rather than a traditional campaign because, as Kaplan explained it, "This sort of content really speaks to the true essence of Spire: It's a surprise and a delight, and the nature of the content showcases the tech and the engaging aspects of the machine. It really brings a smile to your face as you're trying new things and raising your flavor."

Kaplan added, "You never know what you're going to get with real consumers, so it was great getting real reactions."

But will Pharoah work with the brand again? "We'll see what happens," he told Adweek. "Like I said, I love Pepsi."