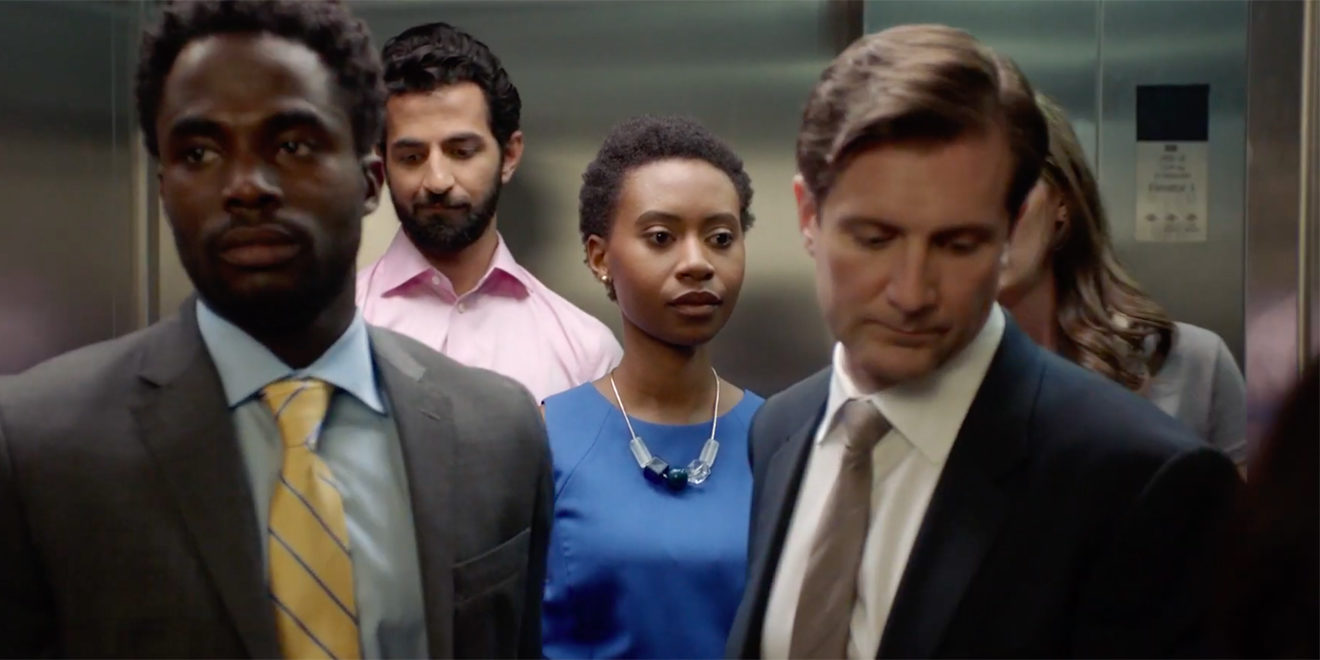 "That Little Voice" from RBC encourages employees and executives to speak out when they see bias in the workplace.
RBC
Share
By Mary Emily O'Hara
|
February 19, 2020
Share

When it comes to diversity-focused campaigns, agencies often take one of two approaches: cultural immersion that can sometimes be read as pandering or emotionally tinged work that highlights the struggles or accomplishments of an underrepresented group. But how often do we see advertising that offers something we can use, like instructive tools for an increasingly multicultural workforce?

Royal Bank of Canada and Canadian ad firm Grip Limited managed to hit the mark with “That Little Voice,” a video for the bank’s “Speak Up For Inclusion” campaign. Following a group of people through a typical day at the office, the video offers a rare instructional look at diversity without coming across as a saccharine after-school special.

By focusing on the nagging feeling that hits when we fail to speak up against discrimination, especially when it’s happening to someone else, the message reaches everyone, from the white male executive in his corner office struggling with whether to respond to a racist comment to the person who zones out in a presentation given by someone whose first language isn’t English.

Gopal Bansal, senior director of diversity and inclusion at RBC, told Adweek the campaign shows how “everyone has a role to play and a responsibility in creating a truly inclusive culture.”

“It’s asking the question of, ‘What would you do if no one were watching?’” Bansal said. “We want to remove the fear of failure or repercussion of speaking out and enable the creation of a space for openly authentic inclusive behaviors to be shared which promote acceptance.”

“RBC believes diversity is a fact, and inclusion is a choice we make as individuals and leaders.”
—Gopal Bansal, senior director of diversity and inclusion, RBC

The first half of “That Little Voice” shows a range of biased actions taking place in front of uncomfortable, but silent, observers or targets. But later in the video, we see those observers step up, taking small actions to challenge the discrimination and start a dialogue with their colleagues.

The message is clear: It’s not always easy to know what to say in the face of bias, but you should listen to that voice in your head that tells you when something is wrong.

The campaign manages to tackle multiple forms of discrimination at once without watering anything down or shoving it down the viewer’s throat.

The ad shows Islamophobia, sexism, parenting discrimination and racism all taking place in one office. But in each seemingly disparate incident, the underlying message is the same: Don’t be afraid to speak up.

“We think there is power in going back to the basics of human empathy to help push the conversations about diversity and inclusion forward,” Bansal said, explaining that the multiplicity of bias in the video is intended to make the overall experience relatable to everyone.

It’s a thoughtful approach that goes a little deeper, examining the difficulties that crop up as diversity becomes a sort of surface mandate in the corporate world that doesn’t always trickle down to making the office a comfortable and truly inclusive environment for a multicultural workforce.

That’s a tool that adland can put to use, as the industry struggles to diversify but maintains a problem when it comes to retention and promotion. According to ANA’s 2019 diversity report for the industry, black and Latino professionals enter the industry in significantly lower numbers than their white counterparts. And within the profession, their numbers go down in proportion to career level. That means employees of color are either leaving the industry altogether or stagnating in entry-level jobs without promotion.

Doner svp of strategic planning Alima Trapp recently told Adweek that the industry suffers from “the limited cultural competency and support required to retain diverse talent.” Understanding the microaggressions workers face on a daily basis, like those seen in the RBC campaign, could help improve agency environments and talent retention.

“Having diversity is just one part of the story; how well that diversity works together is key,” Bansal said. “RBC believes diversity is a fact, and inclusion is a choice we make as individuals and leaders.”