Messages inspired by a bottle

Legend has it that sometime in the mid-'80s, Andy Warhol fell in love amid the pulsing lights and throbbing beats at ultra-chic New York disco Studio 54. Gazing across the bar, Warhol spied a bottle of Absolut Vodka. Modeled on classic Swedish medicine vials traditionally sold at pharmacies along with spirits, its design was simple yet elegant, the perfect fusion of form and function. Soon, the object of the pop artist's affection would become an objet d'art (and commerce) itself, epitomizing the Reagan/Bush-era obsession with artsy glamour and chic consumption in much the same way Campbell's Soup cans—a Warhol fling two decades before—came to represent the consumer culture of the Kennedy and Johnson years. 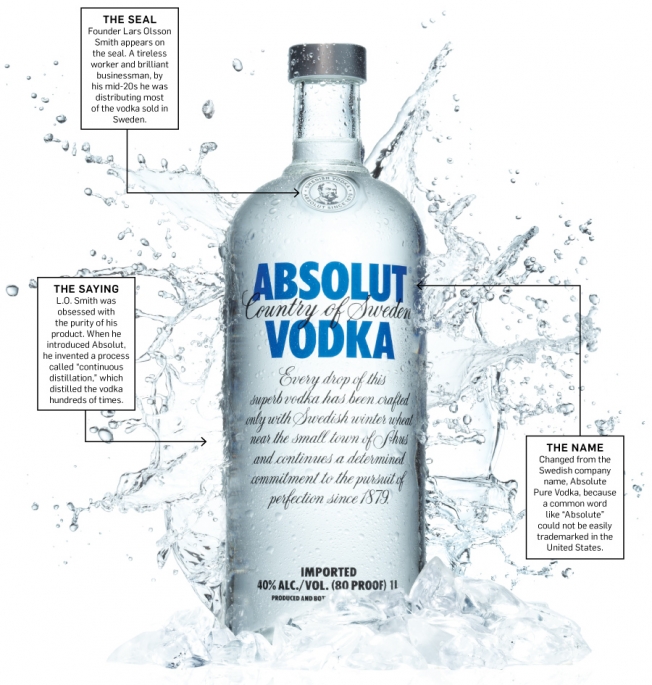 Some call the Studio 54 story into question. Perhaps Michel Roux, CEO of Crillon Importers, which introduced Absolut to the U.S. in 1979, simply commissioned Warhol to create some artwork around the brand. "I love the bottle, I want to do something," is all Andy ever said on the subject. And still, there's no doubt that Warhol's involvement, along with subsequent contributions from other artists and celebrities, helped elevate Absolut to dizzying heights.

By the time "Absolut Warhol"–a typically playful piece from the master appeared in slick magazines in 1986, the brand had already been worming itself into the public consciousness for half a decade thanks to clever ads from TBWA. Art director Geoff Hayes is credited with developing the iconic template. Richard W. Lewis, who ran the business at the New York agency during its glory years from 1987 to 2003 and later penned two books about the campaign, distilled the format as: "A bottle, two words, and a little bit of wit."

Said bottles, stylized in various eye-catching ways, would be teamed up with playful, two-word headlines. (An early classic, "Absolut Perfection," used a halo and spotlight to memorable effect.) Later, objects of every sort—from lunar reflections on water to an overhead shot of Central Park—were cast in the shape of Absolut bottles. "These looked more like covers of The New Yorker than advertisements," said Robert Thompson, a professor of popular culture at Syracuse University, while the poetic quality of the minimalist text was in a realm all its own.

Just as the concept began to capture the public's imagination, the brand added interpretations from creative folks, giving the campaign added depth and dimension. Absolut commissioned more than 800 artworks by Warhol, Keith Haring, Annie Leibovitz, Helmut Newton, John Irving, Lady Gaga and Jay-Z, among many others. "We were sending the message out to cool people everywhere that this was the brand for cool people, for the people who followed these artists," Lewis said. By some counts, Absolut produced more than 1,500 bottle ads in various media. Novel innovations—such as holiday print ads that played carols or contained working snow globes, and Absolut-branded gloves from DKNY included with magazine spreads—kept things fresh and generated lots of PR. Sales surged from 10,000 cases in 1980 to nearly 5 million as the new millennium began.

As time passed, however, Absolut's approach, well suited to a challenger brand, fizzled, and variants like the humorous "In an Absolut World," while popular, failed to evolve. Meanwhile, brash rivals like Grey Goose and Svedka siphoned off market share from the brand, which is now owned by Pernod Ricard. Though recent work has touched on innovation—"Absolut Reality," a VR play from a few months back, springs to mind—the brand's advertising heyday appears to have passed. (For the record, it split with TBWA as lead agency three years ago.) The brand indulged in some nostalgia last Christmas, unveiling an Andy Warhol bottle based on his original design. The move generated headlines and seemed to bring the journey full circle. It's been a great ride, proving that with just the right twist, fame can last for more than 15 minutes after all.