This Is Us Went From Being an Abandoned Film Script to a Breakout Hit. Here’s What’s Next

Adweek’s Show of the Year reinforces the power of broadcast 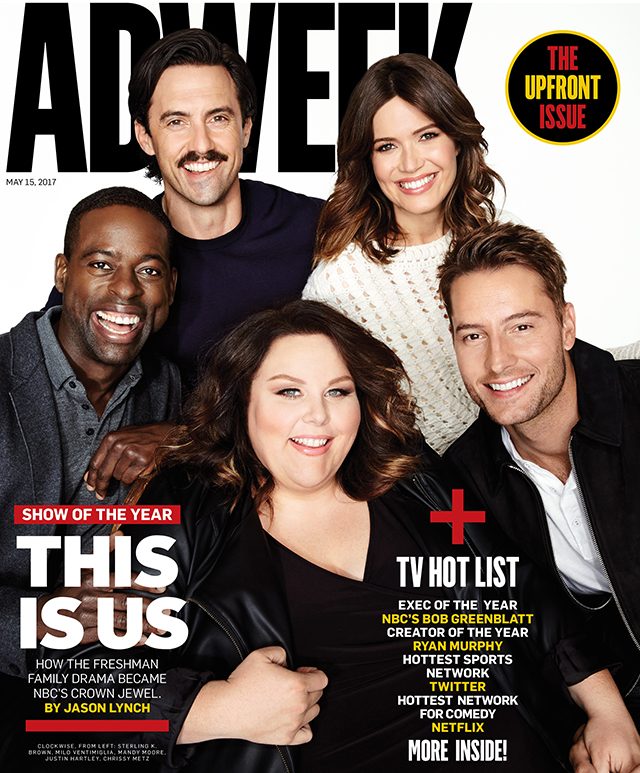 Attending NBCUniversal’s upfront presentation last May, four days after NBC had picked up her pilot This Is Us, was a completely new experience for Mandy Moore. “Having been a part of pilot season for a number of years, but never having had a show picked up and actually go to upfronts, I was beyond thrilled. I had no idea that NBC took over Radio City Music Hall and what a gigantic production it was,” says Moore, who walked the red carpet that day with her new co-stars Milo Ventimiglia and Sterling K. Brown. “We were so excited. It felt like a celebration.”

Little did she and her castmates realize that the celebrating had only begun. Later that night, as the drama’s creator Dan Fogelman was in a cab heading to an upfront party, he received a text from NBC Entertainment president Jennifer Salke. “She said, ‘Have you heard what’s going on with the trailer?’ I went online, and saw that things were already starting to explode,” Fogelman recalls of the show’s upfront trailer, which had quickly gone viral and racked up 50 million Facebook views in its first 11 days. “That was like Moment One, and it’s all been like that from there.”

The public’s infatuation with This Is Us—Adweek’s Show of the Year and Hottest Drama in our annual Hot List—has only grown since then. Last September, 10 million viewers watched the premiere, making it NBC’s most-watched scripted show in the time slot in more than seven years. Then, the pilot’s jaw-dropping twist—that the three siblings turning 36 (Brown, Chrissy Metz and Justin Hartley) were in fact the children of Ventimiglia and Moore’s characters, who were seen giving birth in what turned out to be a separate timeline—kept them coming back for more.

The buzz built all season, with the finale tallying the show’s highest-ever ratings (17.8 million total viewers in live-plus-7). The first season averaged 15.3 million total viewers and a 4.8 rating in the 18-49 demo in live-plus-7, according to Nielsen, making it the season’s most-watched hour-long broadcast entertainment series in the demo, and helping NBC retake the 18-49 crown this season. More importantly for advertisers, This Is Us had NBC’s highest commercial ratings this season (a 3.14 C3 rating; a 3.36 C7 rating) outside of football, and trailed only The Big Bang Theory and Empire among all broadcast entertainment series.

NBC is betting that the show will have an even bigger sophomore season, aggressively shifting the series to Thursdays at 9 p.m. this fall to anchor a revitalized lineup, including the revival of Will & Grace, that will feature the return of its Must-See TV branding for the first time since Will & Grace and Friends went off the air a decade ago. “It’s a really audacious play to move it, not without risks, but it’s a passionate audience and I think they will go wherever we put it,” said NBC Entertainment chairman Robert Greenblatt, who also scheduled This Is Us to air after the Super Bowl on Feb. 4.

Its success “shows the power of network television and what kind of enormous audience you can draw to something, that it’s possible to have these huge hits,” says Salke. “We all live with linear ratings going down and finding alternative ways to monetize our shows and getting smarter about digital. Giant, tent-pole hits like this are what help keep all of that afloat and thriving.” Adds Ventimiglia, “Times have changed, but an audience’s want for good storytelling doesn’t. If it’s good storytelling, people will tune in.”

No one was more surprised about the extent that This Is Us connected with audiences than Greenblatt, who had expected that it would have a similar ratings trajectory to his family drama Parenthood, which had modest ratings during its six-season run. And with softening linear numbers, “you don’t assume something is going to become as big as This Is Us did, you just can’t,” he says. “You’re conditioned to hope for the best and expect less than that.”

While Greenblatt was hedging his bets last summer, NBCUniversal’s ad sales chief Linda Yaccarino was taking the opposite approach during her upfront negotiations. After the trailer went viral, “we were so confident in the show that we were what people might deem a little too aggressive for a new, ‘unproven’ show,” she says. Her team held back on upfront inventory, “because we were betting that it would do well and there would be momentum in scatter.”

That’s exactly what happened. After the strong early ratings and social buzz, “it immediately started showing up in RFPs [requests for proposal] and budgets as a must-have show,” says Yaccarino. The show’s average cost for a 30-second ad, which had been $198,900 in the upfront market, leapt to $301,800 in scatter, with season finale spots going as high as $402,000, according to data from SQAD MediaCosts: National (NetCosts).

Buyers loved This Is Us’ big numbers and buzz, but they also applauded its new approach to a storied genre. “In some ways I liken it to Modern Family, which was a fresh take on the family sitcom by centering around less traditional families. And this is appealing in that same way,” says Jill Isherwood, vp, associate director of broadcast research at GSD&M.  The show’s success proves that “there’s still a place for family-oriented drama, and that’s a larger part of what makes it appealing to broader demographics, because everyone can relate to it.”

Before This Is Us became this season’s biggest broadcast hit, it languished for more than a year and a half as an unfinished movie script. Fogelman had written around 60 pages of the project, which he called 36, but struggled to make the story work as a film. “So I gave up on it, and I had never done that before,” he recalls. Then after he signed a big development deal with 20th Century Fox Television in 2015, Fogelman dusted off the script and realized that “as a TV series, it’s more about the characters and the journey. And I can get my head around that.”

The studio loved it, but Fox Television Group chairman and CEO Dana Walden, who also runs Fox, knew that her network wasn’t the best fit for the series. “When we have our studio hats on, we’re looking at every project individually and thinking, what’s the best opportunity for this show?” says Walden. “For this show to succeed, no network had a better opportunity last fall than NBC,” given the promotional platforms of the Rio Olympics and The Voice. 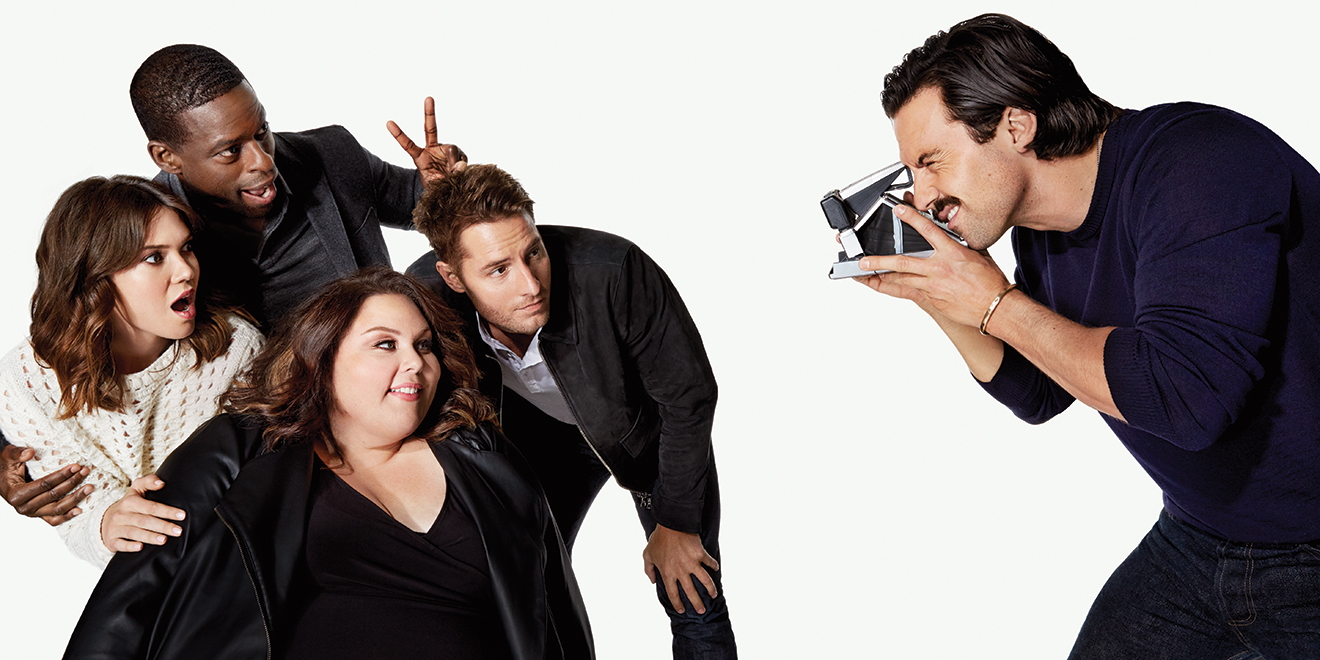 So Walden sent the script to NBC’s Salke, where it immediately set itself apart from the other 50 drama scripts that she and her team read that year. “The minute I finished, I wished I could erase my memory and experience it all over again,” says Salke. “I thought this was the most special show I had come across in a very long time, since Glee and Modern Family.”

Her instinct was confirmed after the trailer took off last May. At that point, “we knew we had something extraordinary,” says Greenblatt, “and it was our job in terms of marketing and promotion to fan the flames in every possible way we could think of for the next four months.”

After the buzz exploded last summer, Fogelman credits the network and studio for not attempting to modify his storyline for the second episode, in which Moore’s Rebecca and Ventimiglia’s Jack are seven years older, and their formerly idyllic marriage is in a much rockier place. “It’s a really ballsy thing to do for a network show, especially for something that has gone viral and has all these eyes on it,” says the creator. “They never changed their plan because of the reaction, and never said, ‘Do you want to delay that so audiences have time to sit into the show a little bit?’” Notes Ventimiglia, “I wonder if the show would have even gone the distance had it been on another network.” 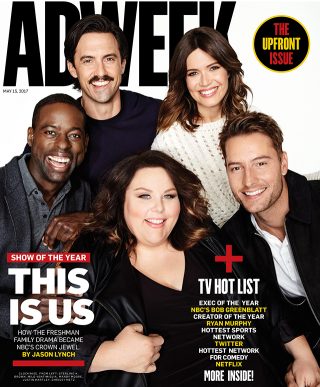