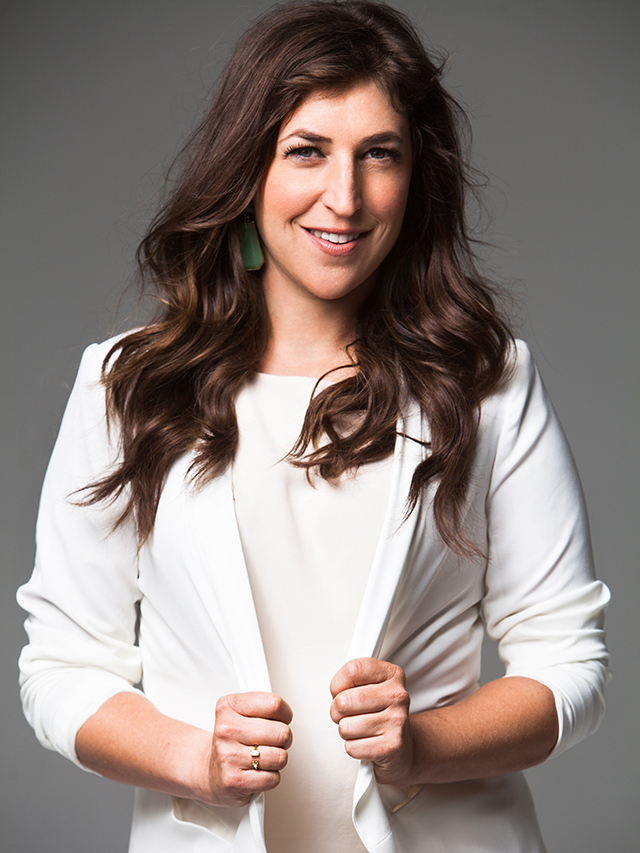 Mayim Bialik has always wanted more out of her career than just acting. TV audiences know her as The Big Bang Theory’s Amy Farrah Fowler (who is engaged to Jim Parsons’ Sheldon Cooper in the show) or as the star of NBC ’90s sitcom Blossom; on top of that, she’s also a neuroscientist in real life, and she’s a passionate writer about topics like parenting and Judaism on her website GrokNation—which is about to get a big overhaul.

Partnering with new editor-in-chief Christina Kelly (who formerly oversaw Sassy and YM), Bialik is relaunching GrokNation on Thursday. The relaunch positions GrokNation as a lifestyle site that covers news, style, soul, culture and home, with an approach to create greater consciousness and improve the world.

Bialik spoke with Adweek about GrokNation’s relaunch, why being outspoken can make it tough for her to work with brands and what she’ll do after The Big Bang Theory ends its run.

Adweek: When you launched GrokNation in 2015, what were your initial hopes for the site?
Bialik: I was part of the early waves of blogging as a mom before I was on The Big Bang Theory. My closest friend Immanuel Shalev, who is now the CEO of all things GrokNation, had strongly encouraged me to create my own platform where I could talk about more things than I had been blogging about. That was really the impetus for starting my own website, was to have a place for me to share my writings on things more than just Judaism or parenting.

What prompted the relaunch and GrokNation’s expansion into a lifestyle site?
Since we started, Immanuel, our founding editor Esther Kustanowitz and I, have been trying to figure out, what are we? Who are we? What is our target demographic? You could assume, maybe, women who grew up watching me in Blossom. But we have a much broader demographic than we even realized.

So it’s been two years of research, followed by a lot of handwringing and trying to figure out how we can meet the needs of our audience, who seem to really want this kind of information. We spoke to Christina Kelly, who was one of the editors of Sassy magazine, which basically raised me as a teenager. I reached out to her to get her thoughts, and she happened to be putting herself back out there in the editorial world. I practically got down on my knees and said to her, “Will you help us build this?” So it was really her wisdom and her decades of experience in the magazine world that allowed us to [make the transition].

After the relaunch, how frequently will we see content from you on the site, and what will your involvement be like behind the scenes?
I’ll probably be writing at least once a week, but I would guess you’ll see me more like twice a week at launch. I’m not as involved as I’d like to be, but I’m probably just about as involved as I should be. Which means, I need to trust Christina and [managing editor] Dalene Rovenstine. I tend to want to micromanage everything, that’s just my personality, but they know a lot more about most aspects of this.

I’m much more active, I think, than people would expect from a site sponsored by a celebrity, meaning this is not something I can just put my name on and go about my day. It’s something that I am involved with literally every day in some way or another, whether it’s publicity for the site, or writing, or speaking with editors or planning new pieces. So it’s a daily part of my life.

Will you be working with any brands on GrokNation’s relaunch?
Up until now, we have not been a sponsored site. This was something that started small, and now it’s getting big. With big comes more structure. Our interest is to find brands who are aligned with the philosophy we have. A lot of it, again, is an exploration: How can we best meet our needs without people feeling like they’re constantly being flooded with information that they’re not coming to the site for? This is something I’ve never really known about, so I’m learning as I go.

"This is not something I can just put my name on and go about my day."
Mayim Bialik, on GrokNation

You’ve had partnerships with several brands over the years, including Texas Instruments, DeVry, Capital One and Fisher-Price. What is your personal approach when it comes to brand partnerships and what makes sense for you and your career?
Sometimes it’s really about who has interest in you. [laughs] I’m not at the point in my career where everyone’s knocking on my door and, “Gee, how do I pick?” I am aware that I’m a very outspoken person. I’m an advocate of breastfeeding, and a lot of stuff about my life can be problematic for some people. There are reasons that lot of prominent people choose not to speak out about controversial things—because it can impact who’s interested in you. So I’m very grateful to companies who have given me an opportunity to share authentically about things that are important to me.

The Capital One campaign I did was about education. I got to interact with students, and that’s a slam dunk for me, as someone who was raised by public school teachers and was a graduate student teacher and taught for the years before I was on Big Bang Theory. Stuff surrounding kids and development—as the Fisher-Price toys were about coding—resonate deeply with me. I do a lot of public speaking, and I tend to speak for Jewish federations, for international organizations that support egalitarian Jewish education. And I speak for universities: for women’s departments, for science departments and theater departments.

This is one of the challenges, to bring it back to GrokNation: I have actively chosen not to be one thing.

What do you mean by that?
I can’t tell you how many people in my career, especially in the last eight years [since Big Bang Theory], have said to me: You have to pick what you are. You have to decide what GrokNation is and make it pink and just for girls. I decided—and Christina and Immanuel and Esther have helped me—to declare that in real life, you don’t have to pick one thing that you are. We decided that we’re going to do something very ambitious, that a lot of marketing people have told us is a terrible idea. But we believe in it. It’s not going to work on the level of Goop, necessarily, but it will work on the level of the people that we believe in, and that we believe want this kind of information.

Right before the season, Big Bang creator Chuck Lorre told me he thought the show would most likely end its run after next season. Does that echo what you and your castmates feel about the show’s future?
I’m the least business savvy of everyone in the cast, so I don’t always know. We do sometimes talk in depth among us, behind closed doors. I can’t speak for anybody else, but I can speak for myself in that I have nowhere else I’d rather be. I have nothing else planned, so if they want to do a show and it’s just me because I’m the last woman standing, I’ll do it!

Whenever the series does wrap up, what would you like to do next?
It would be disingenuous for me to say that I don’t wish that Greta Gerwig would put me in a movie. I want that to happen more than anything. But it’s also true that sitcom actors often don’t get a lot of the offers that many other people do. I could definitely see doing more TV if that’s where people like me. I definitely also would relish more time with my kids, to work on the site and to do more speaking engagements.

But it’s important to note for women in particular—and for “character actresses” or “ethnic actresses,” which is what I am—we really do need to strike while the iron is hot. I wish I could say, “I want to take six years off and let my youngest finish school and then I’ll return to acting.” It’s kind of like being an athlete: when you’re in your prime and people have interested in you, that’s when you need to be that. So I understand that this is the business, and sometimes you give the people what they want when it’s presented to you.