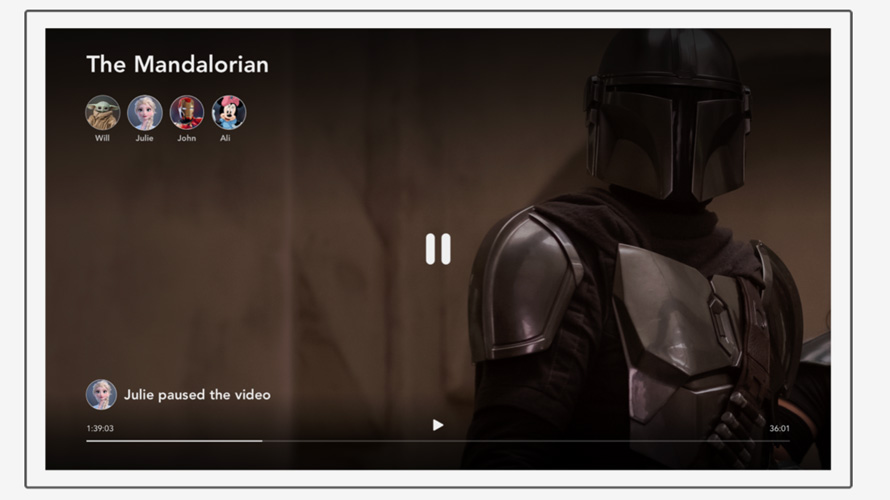 With Group Watch, up to seven Disney+ accounts can link up to simultaneously watch shows like The Mandalorian. Disney+

Disney+ is rolling out a remote co-viewing feature that will enable subscribers to watch the platform’s programming together virtually.

GroupWatch will allow up to seven different Disney+ accounts to link up and co-view programming with one another on the streaming service. Starting today, users on the Disney+ mobile app or web browser will see a co-viewing icon next to the Play button on Disney+ programming. If clicked or tapped, that button will allow users to send invitations to as many as six other people.

Invitees, who must have their own Disney+ accounts, can join through those invitations to watch the program together simultaneously on web, mobile or on their connected TVs or smart TVs. There’s a reaction function built into the Disney+ mobile app where co-viewers can react to programming with different emojis.

The feature arrives as Disney+ prepares fall releases of originals like The Mandalorian, which premieres its second season on Oct. 30, and WandaVision, which is slated to premiere in December. It also comes as the Covid-19 pandemic continues to affect travel plans, group outings, and play dates, and as children, for whom much of the Disney+ programming library is catered, are largely relegated to at-home virtual learning.

“Storytelling comes alive when you’re able to share and enjoy it with others,” Jerrell B. Jimerson, svp product management for Disney+, said, “and in this moment when many are still apart from their friends and family, GroupWatch offers a way to safely connect virtually by co-viewing your favorite Disney+ stories with your favorite people from the comfort of your living room.”

GroupWatch comes to Disney+ a few months after sister service Hulu rolled out its own co-viewing feature, Watch Party, to ad-free viewers in late May. That option, which supports up to eight people watching concurrently, was the first in-app co-viewing experience that rolled out on streamers. It was also one of several features that the streamer rolled out this year as streaming consumption grew almost across the board. Hulu recently expanded the feature temporarily to ad-supported viewers to encourage co-viewing of the second season premiere of comedy Pen15.

There are also several popular web browser plug-ins, including Netflix Party and Scener, which allow for web-based co-viewing and chatting.

Disney is looking for ways to bulk up Disney+ even further as it remains a lone bright spot for the company that’s been hit hard by the pandemic’s effects on parks entertainment, ad sales and theater revenue. The streamer cleared 60.5 million subscriptions in August, and in a pandemic experiment, opted to make its thrice-delayed theatrical film Mulan available to rent for $30 on the service.

Mulan will be one of the titles available to co-view through GroupWatch, provided that all co-viewers have paid for Premier Access to the title.