The Year in Creativity: 20 Trends That Drove Some of 2016’s Best Marketing 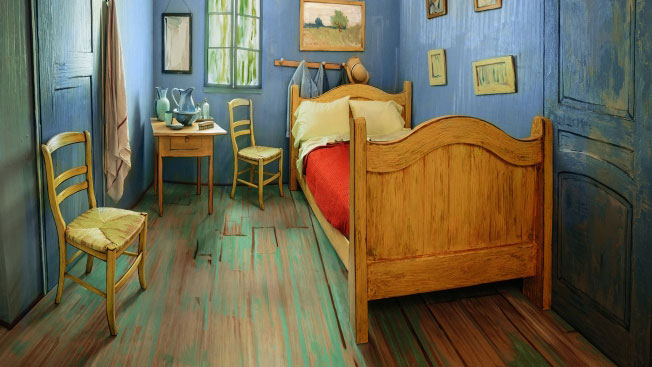 We've chosen the 10 best ads of 2016, led by Droga5's brilliant spot for Under Armour with Michael Phelps. Now, let's look at some of the major creative trends of 2016—the themes, concepts and strategies that invigorated marketers and led to some of the year's most interesting work.

Below are the trends, in no particular order:

Advertising might not be art, but it embraced art like never before in 2016. Some of the most intriguing creative advertising of the year referenced, incorporated and in some cases promoted fine art. Among the notable campaigns: Leo Burnett Chicago's "Van Gogh Bnb," a life-size version of Van Gogh's bedroom, made for the Art Institute of Chicago and rented out on Airbnb; J. Walter Thompson Amsterdam's "The Next Rembrandt," which had a computer study the master's works and make a completely new painting in his style; and Goodby Silverstein & Partners' "Dreams of Dali," a VR experience that took viewers inside one of the surrealist's works.

The Paralympic Games are always a resonant moment to shine a light on disability, and the U.K.'s Channel 4 didn't disappoint, following up its famous 2012 spot about disabled athletes with a sequel, "We're the Superhumans," that was just as powerful. Disability was a focus of much brand marketing, too—from Lego's disabled minifigure to a wonderfully cast Maltesers campaign to Burger King's spot with the King using sign language. Also unforgettable—Grey Australia designing a bike that has the symptoms of MS.

Brands continued to embrace livestreaming in 2016, through products like Facebook Live and Periscope. They also produced some fascinating, more highly designed live commercials. The most impressive was Target and Deutsch's live four-minute music video with Gwen Stefani that aired during the Grammy Awards. Also noteworthy—British grocer Waitrose broadcasting live from its partner farms for an entire week, and making TV spots and print ads from the footage.

The trend toward being more open, honest and self-aware about the act of marketing only grew in 2016. Look no further than one of the year's biggest movies, Deadpool, whose ad campaign was wonderfully meta and hilariously mindful of its own tropes (just as the film was). Other comically transparent ad campaigns included Droga5's Clearasil work (below), which openly admitted its ignorance of the target. Most impressively transparent, though, was The Swedish Number, a tourism campaign that invited anyone in the world to dial a number and have a completely unmediated talk about the country with a random Swede.

Yes, brands were transparent—except when they weren't. Several remarkable campaigns used elements of deception this year to deliver shockingly memorable surprises. Most notable were the Louise Delage campaign on Instagram for Addict Aide, with the fake French ingenue hiding a disturbing secret; and Sandy Hook Promise's "Evan" PSA, which pretended to be a lighthearted story about young love before taking a troubling left turn. It was obviously a huge political year, and lots of the advertising was creatively interesting—whether from ad agencies, brands, rogue creatives, super PACs or the politicians themselves. The two most memorable spots from candidates were the ones below—from Gerald Daugherty and Jason Kander. (Daugherty won his race, while Kander did not.)

Sorry, 16×9. This was the year when square and vertical video broke through for good, thanks to mobile apps like Instagram and Snapchat. Facebook's vertical video ad format went live this fall, but vertical was even the rage back on the Super Bowl—a vertical spot, Jeep's "Portraits," was the best ad on the game. Meanwhile, Instagram inspired a ton of square creative, and not just video. One of the coolest Instagram campaigns of the year, by Goodby Silverstein & Partners, involved Sonic making square shakes in real life—inspired by Instagram and available for purchase through the app.

The rise of the robots continues apace. IBM's Watson had a huge year, making its first movie trailer and AI-powered digital ads, as well as teaming up with Condé Nast to find influencers for brands. J. Walter Thompson Amsterdam's "The Next Rembrandt" for bank client ING was a remarkable display of AI in creativity (mostly in the field of data visualization). And Google's AlphaGo project won the Innovation Grand Prix at Cannes. Some ads explored the darker side of AI, too, including a French agency's memorable spot about the limitations of robot caregivers.

The biggest VR triumph of the year was McCann's "Field Trip to Mars" for Lockheed Martin, which was a brilliant group VR experience (though not exactly easy to scale). Less welcome, perhaps, was South Park's fart-smelling VR device.

Adobe's Photoshop tool has notoriously been a force for good and evil over the years, and continued to be a flashpoint in 2016—in ways both serious and lighthearted. Madonna Badger of Badger & Winters vowed not to airbrush women in her agency's ads "to the point of perfection"—in delivering her #WomenNotObjects manifesto back in January. But the most sly critique of airbrushing came in the form of comedy—Snickers and BBDO New York's hilarious back cover of the Sports Illustrated swimsuit issue, showing a model airbrushed by retouchers who were too hungry to do the job properly. Advertising's embrace of more diverse imagery has been building for years, but reached a new peak in 2016. It began with Axe, of all brands, launching the remarkably inclusive "Find Your Magic" campaign just two weeks into the year. Other highlights included H&M's stunning "She's a Lady" spot by Forsman & Bodenfors and P&G's "Stress Test" work for Secret by Wieden + Kennedy. Also, post-election, at a time when the country never seemed so divided, Amazon had a big hit with its interfaith spot featuring a priest and an imam.

Got a few hours (or days) to soak up some ads? Plenty of brands were willing to oblige, whether it was U.S. Cellular's seven-hour preroll, Laphroaig's three-hour-plus insult fest with Andy Daly, or Somersby Cider's 24-hour (!) livestream of a guy making GIF-like repetitive movements.

Advertisers have long shied away from the topic of divorce—understandably, but also oddly, given how many people experience it firsthand and would likely see messaging around it to be relatable. This year saw brands getting a little braver around the theme—with Ford making a whole short film around it, and Ikea producing the lovely ad below.

Great packaging ideas that embody a brand promise or utility are always delightful, and we saw many this year—particularly in the realm of soda and beer cans, oddly enough. Diet Coke used HP Indigo digital printing technology to create literally millions of completely unique labels. Bud Light's expanded line of NFL cans was greeted warmly by football fans everywhere. Orangina made an upside-down can that mixed up the pulp when you flipped it over to open it. The most ingenious innovation, though, wasn't a can but a six-pack ring made by New York agency We Believers for Saltwater Brewery—made of grains left over from the brewing process and totally edible to sea life.