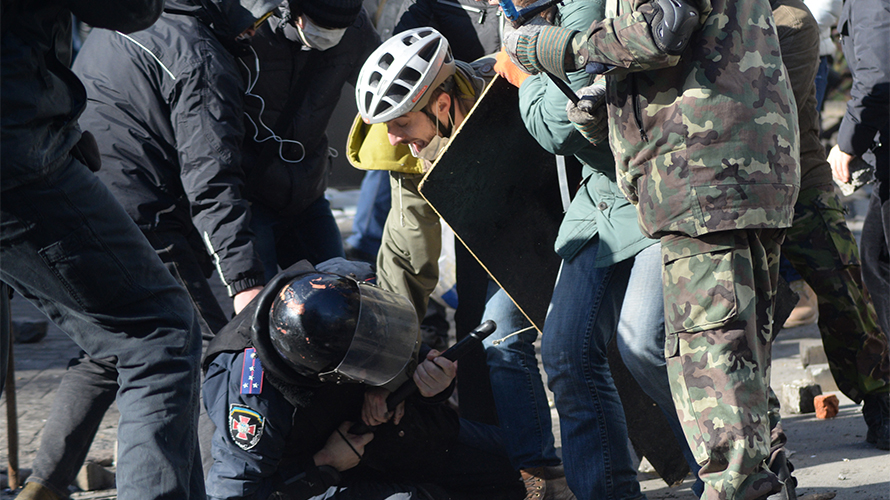 President Donald Trump’s reelection campaign has occasionally sparked reactions ranging from mockery to outrage due to its image selections in recent Facebook ads.

A campaign ad vowing to “protect” a statue of Jesus earlier this month—amid national debate over the removal of statues glorifying Confederate leaders and slavery—oddly used a photo of Rio de Janeiro’s Christ the Redeemer statue, while a more serious incident in June saw Facebook remove several campaign ads featuring a triangle image associated with the Nazi regime (a campaign spokesman argued that the image represented Antifa).

Now, critics of Trump have pointed out that a recent Facebook ad touting “public safety vs. chaos & violence,” which seems to contrast the president standing among members of law enforcement against U.S. protesters clashing with police, actually features a 2014 image from the pro-democracy revolution in Ukraine.

The photo, shot by Mstyslav Chernov on Feb. 18, 2014, shows protesters fighting with police forces sent by authoritarian-leaning President Viktor Yanukovych in what would come to be known as the Ukrainian Revolution.

Yanukovych, who had cracked down vehemently on protesters and favored stronger ties with Russia—while his opposition favored aligning with the EU—was unanimously removed from office by the Ukrainian Parliament after he fled into exile in Russia in late February 2014. He was later found guilty of treason and sentenced, in absentia, to 13 years in prison.

The Trump campaign’s use of an image from protests that led to regime change in Ukraine was pointed out on Twitter Tuesday night by former Hillary Clinton foreign policy spokesman Jesse Lehrich.

a new Trump ad warning of chaos & violence depicts a cop being attacked by protesters...

...only it's a pic from Kyiv in 2014, when Yanukovich's thugs fought to quash a democratic uprising.https://t.co/VfJujT50Lm pic.twitter.com/QBrlwauo6s

“Photography has always been used to manipulate public opinion. And with the rise of social media and the rise of populism, this is happening even more,” the photographer, Chernov, told Business Insider. “The only way to combat this is through education and media literacy. When people learn to independently distinguish truth from lies, then the number of manipulations will decrease.”

The campaign ad, labeled as “Evangelicals for Trump” and placed by Trump’s campaign political action committee, comes as Trump attempts to position himself in opposition to nationwide protesters, especially in Democrat-led cities like Portland, Ore., and Chicago.

In recent days, the president has deployed federal law enforcement officers in camouflage to detain protesters in Portland, sparking outrage from Democratic elected officials and allegations of authoritarianism.