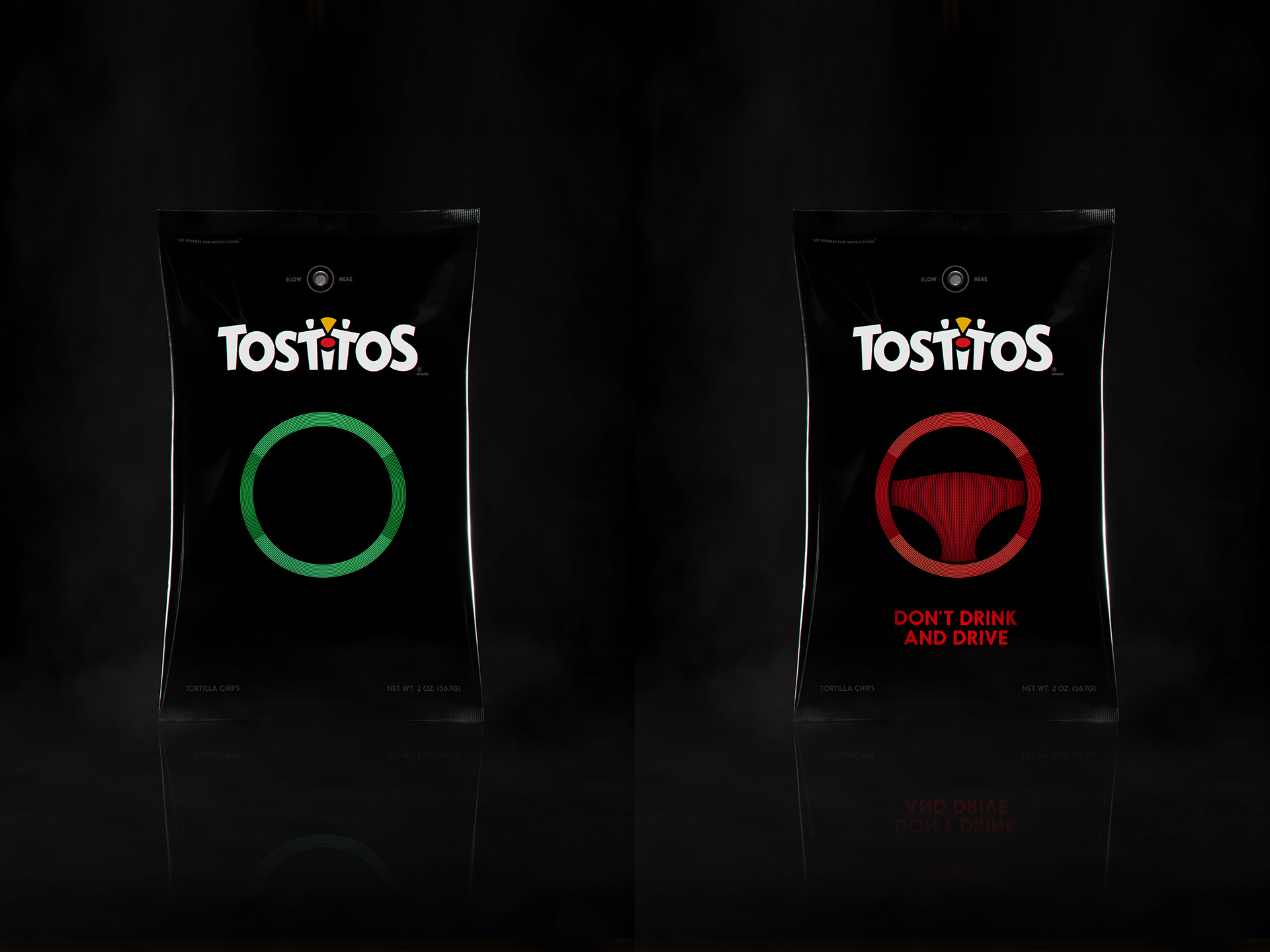 Doritos might have crashed out of the Super Bowl after a decade of fun ads, but Frito-Lay still has a few party tricks up its sleeve for this year’s big game. The chip maker’s Tostitos brand has made a limited-edition “Party Safe” bag that can tell when you’ve been drinking, and will help you get home safely from that Super Bowl party.

The special bag, created by Goodby Silverstein & Partners, comes equipped with a sensor connected to a microcontroller calibrated to detect small traces of alcohol on a person’s breath. If any alcohol is detected, the sensor turns red and forms the image of a steering wheel, along with an Uber code and a “Don’t drink and drive” message.

The bag also uses near-field communication (NFC) technology, allowing fans to tap the bag with their phone to call a ride. With Uber and Mothers Against Drunk Driving, Tostitos will offer partygoers $10 off their Uber ride during and after the Feb. 5 game.

It’s not quite as cool as a Breathalyzer type device, which could warn you if you’ve had too much booze, rather than any at all. (You figure you’d already know the answer to the latter.) But it’s a neat party gimmick that should get people talking—and getting in more Ubers.

“We’re proud to introduce to the world the first bag of chips that gets you home safe,” says Roger Baran, a Goodby Silverstein & Partners creative director. “For a football fan, there is a lot of emotion involved with a game. It’s easy to drink more than you planned. And a lot of times all you need to stop short of driving after drinking is a friend who calls you off. On Sunday of the big game, we want Tostitos to be that friend.”

“We designed the technology and the bag from the ground up and then had to scale it,” adds Sam Luchini, also a GS&P creative director. “It had to function as a beautiful bag and also like an alcohol detector. It was form and function together.”

“Our goal is to remove 25,000 cars from the roads that Sunday evening,” says Jennifer Saenz, Frito-Lay’s chief marketing officer. “Whether watching the big game at a friend’s house or at a local bar, a safe ride home is just a few easy taps away. By simply entering a participating Tostitos UPC code in the Uber app, fans nationwide can receive $10 off an Uber ride.”

In 2015, 45 people were killed in drunk driving crashes on Super Bowl Sunday, which was nearly half of all traffic fatalities that day, according to the National Highway Traffic Safety Administration.

“Having a good time and being safe go hand in hand,” says Delanie Walker, tight end for the Tennessee Titans and a MADD volunteer, whose aunt and uncle were killed by a drunk driver following the 2013 Super Bowl, in which Walker played. “Drunk driving is 100 percent preventable. Thanks to Tostitos and Uber, it’s easier than ever to make a safe choice if your plans include alcohol.”