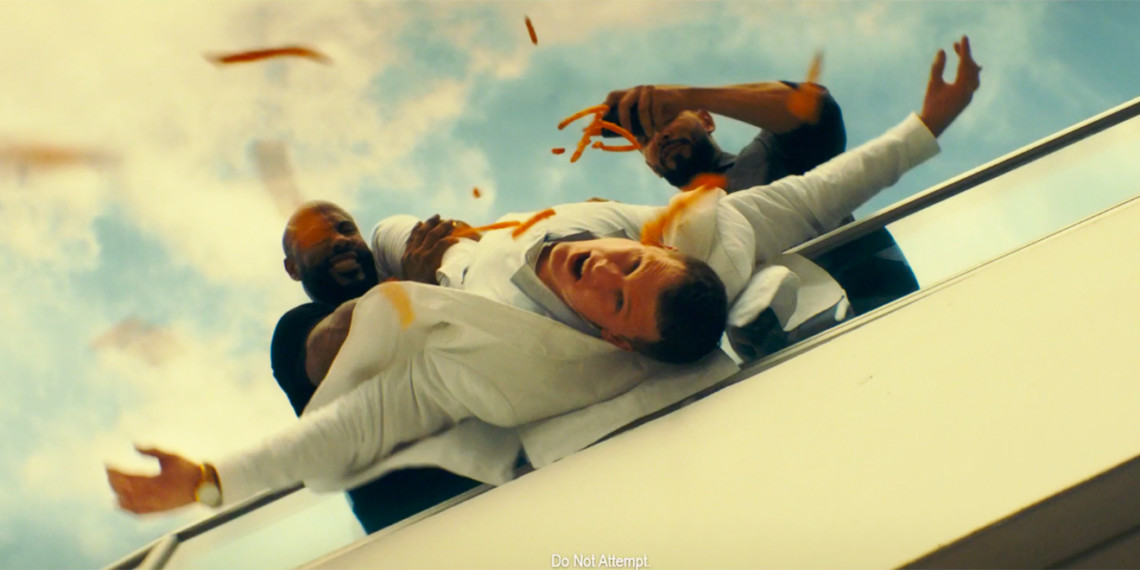 When two friends try to launch black-market nacho fries, they quickly find themselves dipped in over their heads. Taco Bell

Now the campaign is back with its fifth faux trailer, this time for Supply & Demand, a fast-paced action homage to the Fast & Furious franchise (and, perhaps most notably, its 2019 spinoff, Hobbs & Shaw, though Taco Bell’s iteration goes a lot lighter on the hand-to-hand combat).

The Nacho Fries trailer series is a marketing outlier for Taco Bell, which rarely relies on the kinds of consistent and ongoing campaigns favored by most brands.

“We don’t really have campaigns in the traditional sense,” advertising and brand engagement svp Tracee Larocca told Adweek. “We don’t have a spokesperson. So this is actually a little bit different for us, to lean into something like this.”

Taco Bell’s movie trailer campaign has covered a wide range of genres, from gritty conspiracy dramas to dystopian sci-fi. The last release, playing off the popularity of musician-themed films like A Star Is Born, featured an aspiring singer corrupted by the excesses of fame in “Chasing Gold.”

Larocca said the genre selection process is based on a mix of fan feedback and observing Hollywood’s hottest trends—especially those that seem most ripe for nacho cheesy parody.

“We start first with what we’re hearing from our fans,” she said, “then we kind of take a look at the landscape and what’s happening from a cultural standpoint.”

Supply & Demand continues the campaign’s frequent theme of hostile and mysterious forces trying to keep nacho fries out of the hands of the public. In the new spot, two streetwise entrepreneurial friends decide to launch their own black-market nacho fries, not realizing how deeply they’d be dipped into a viscous pool of danger.

Similarly, in the first installment, “Web of Fries,” actor Josh Duhamel played an investigator who ran afoul of the “Big Fries” cabal by looking into why Taco Bell had never offered the popular side before. A sequel, set in the near future, focused on his daughter’s war for liberation against an evil clown army (not the subtlest dig at a certain global fast food competitor).

Inventing these shadowy antagonists is the brand’s fun way of satirically explaining why nacho fries are only available for a limited time. While the real reason is likely a mix of manufactured scarcity and a desire to avoid the product being forgotten amid a sea of other fry options, it still makes a better story to blame fictional forces of evil.

“When you’re trying to launch a product that’s already well established in your category,” Larocca said, “you have to establish who the enemy is: ‘Why don’t they want you to have nacho fries?'”

In recent years, Taco Bell has increasingly focused on fanning the flames of its fans’ passion for the brand and its products. Most potently, the chain briefly opened a fully branded Palm Springs hotel called The Bell that generated 4.4 billion media impressions and became an ultimate rallying point for megafans.

“Over the past few years,” Larocca said, “what we’ve really tapped into is this culture of creativity and really unleashing this ‘cult of Taco Bell,’ this passion our fans have for the brand and the food.”

While the movie trailer campaign is specific to nacho fries, Larocca said it also highlights how Taco Bell tries to find new, creative ways into crowded and highly competitive fields, such as offering breakfast.

“What we really tried to do was disrupt convention. We always try to figure out what our unique way into something is,” she said. “If you look at how we’ve launched breakfast, how we’ve launched fries, we’re going into these established categories and trying to disrupt in that space. So what we really do is try to look for the right creative tool to insert us into that conversation.”

Here’s a look back at the campaign’s previous fake trailers, followed by credits for the new spot: