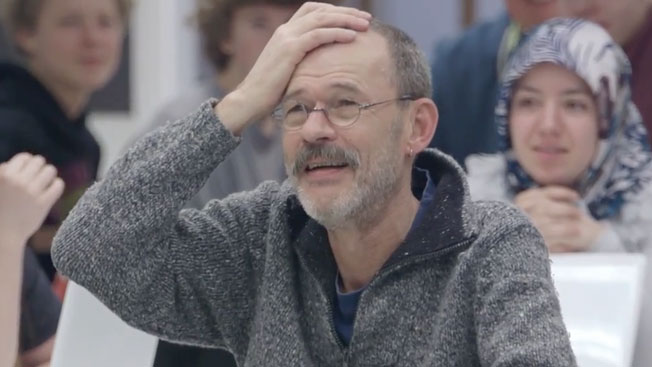 Get out your Kleenex, because Ogilvy Amsterdam and funeral insurance company Dela have brought back their Cannes-conquering "Why wait until it's too late?" campaign—urging people to "say something wonderful" to those they love here and now.

One of three new long-form ads takes place at a concert hall, as a woman named Martine surprises her widowed father midway through the show by taking the stage and serenading him with a song expressing her admiration and affection. In another, elderly Leo, who has struggled with illness of late, appears poolside during his wife's exercise class to thank her for more than 50 years of companionship and devotion. Finally there's Mark, an overweight, bullied teen, who pays tribute to a special teacher who helped him overcome his social awkwardness.

These are real people, not actors, and their reactions are genuine (Martine's dad and Mark's teacher struggle to hold back tears), which ratchets up the emotional intensity, despite the fact that the approach is fairly restrained given the campaign's premise.

This is powerful stuff—an evocative concept expertly realized—though it makes me feel just a tad uncomfortable, like I'm peeking at intimate moments where perhaps I shouldn't pry.

Maybe my discomfort stems at least partly from the realization that there are people I haven't taken the time to thank and praise. By going so boldly public, the folks in these ads remind the rest of us that a few heartfelt words spoken in private can make all the difference.