MassMutual Asks Gay Couples the Question They Haven’t Been Posed: What’s It Like to Be Married?

The answers will move you 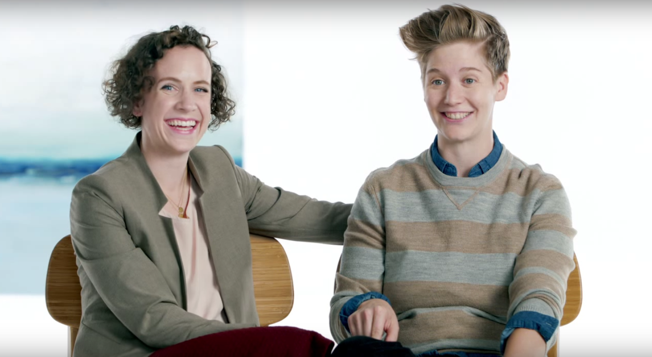 The notion of marriage as a powerful covenant between two human beings shines through in "Vow to Protect," Mullen Lowe's new digital campaign for MassMutual.

The initiative seeks to sell financial products and services to recently wed LGBT couples in the wake of the U.S. Supreme Court's landmark decision legalizing gay marriage. Yet it manages to transcend that mission, serving as a heartfelt testament to devotion and long-term commitment.

In the four-minute anthem spot, we meet five diverse same-sex couples who discuss what their vows mean to them. Speaking directly to the camera, they share hopes, goals and aspirations in frank and moving terms.

"We knew the couples and their stories needed to be front and center," agency group creative director John Wolfarth tells AdFreak. "We were asking these people to share their feelings and fears. We didn't want anything staged in their responses, and we reciprocated that honesty in the simple, clean set and shooting style."

As directed by documentary filmmaker Stacy Peralta (Dogtown and Z-Boys), the simple setup and low-key approach allow the subjects' personalities to shine through. "There are no air quotes around our marriage," says twentysomething Peyton at one point, and the spot closes with middle-aged William's memorable line: "It's love. And isn't that what you want to support?"

"Every couple showed us this was an issue they'd clearly been thinking about for a lifetime," says Wolfarth. "And they delivered more insightful content and soundbites than we could hope for—from a childhood story about growing up in an observant Muslim family, to ongoing workplace discrimination, to wedding planning scams."

This is a purely commercial endeavor, aimed at married same-sex couples. It's not an attempt to convince social conservatives to support a more progressive point of view. But the spot packs more punch than any number of social-issues PSAs we could name.

The subjects are instantly relatable and command respect. They're doing their best to form relationships and families in a frequently harsh world. Their stories are universal to the human experience. With a history of outreach to the LGBT community, which lends legitimacy, MassMutual's brand stands to benefit from this targeted effort to provide information and support.

Other campaign elements include a website and upcoming clips that focus on the individual couples.

"There's been plenty of discussion about giving the LGBT community the right to marry, but no one has really talked with them about what it's like to be married," says Wolfarth. "One of the biggest reveals was that, despite all the buzz about marriage"—and especially in light of continued discrimination and hostility in some quarters—"the journey for LGBT equality isn't over."