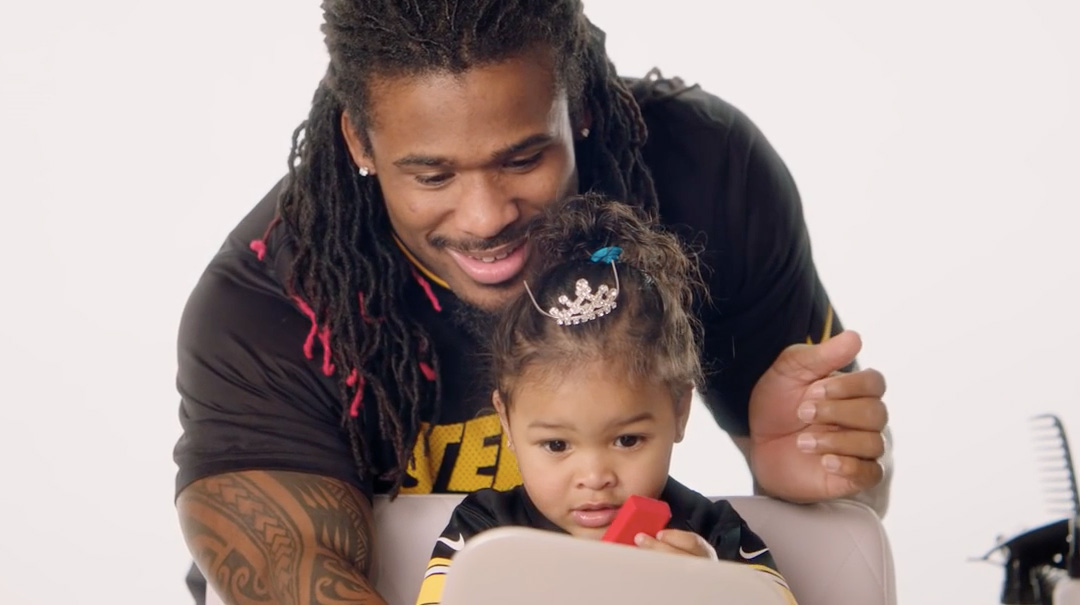 Three NFL stars play a new position—coiffeur—and attempt to give their young daughters hairdos in these charming spots by Grey for Procter & Gamble's Pantene.

The work extends the shampoo brand's "Strong is beautiful" positioning and emphasizes that "Girls who spend quality time with their dads grow up to be stronger women."

DeAngelo Williams of the Pittsburgh Steelers, Jason Witten of the Dallas Cowboys and Benjamin Watson of the New Orleans Saints appear in separate web videos with their little girls. (Williams gets two such ads, actually.) The 30-second spot below, featuring all three fathers, will air in select regional markets during Sunday's Super Bowl:

The campaign echoes Pantene's past women-empowering efforts, like BBDO's workplace-themed Philippines commercial, and a follow-up from Grey that probed why women are always apologizing.

In this case, kids are the focus because "We know strength and self-esteem start by building confidence in girls at a young age," says P&G vice president of hair care and color Jodi Allen.

"When we discovered research done by Dr. Linda Nielsen from Wake Forest University revealing that quality time spent with dads is key in raising daughters who are more self-confident, self-reliant and more successful in school and in their careers, we wanted to do something to encourage dads to do with their daughters," Allen says.

The campaign also brings to mind a viral moment from 2014, when blogger dad Doyin Richards posted a photo of himself doing his daughter's hair during his paternity leave, resulting in surprisingly intense online reactions that ranged from congratulations to stereotypical snipes. At the time, Richards told Yahoo Shine, "The picture stirs emotion for a few reasons … The media doesn't portray fathers as caregivers. We're seen as bumbling fools trying to figure out parenthood or macho men pushing their kids into the NFL. The other issue is that there's a stereotype that black fathers are deadbeats."

It is for all these reasons that these cute clips might strike just the same chords. To be fair, the daughters lack complete confidence in their fathers' hair-styling abilities … and probably for good reason. "I don't know why they make these barrettes so complicated for guys," laments Williams as he struggles with his kindergartner's twisted pigtails.

But a clean chignon isn't the point. "A Dad 'Do comes from the heart," says the Cowboys' Jason Witten in the ad. "There's probably not a whole lot of style."

In other words, it's the act of spending time together—and the curiously subversive gesture of depicting tough-looking, football-playing dads in so nurturing a role—that transcends the activity itself (including any painful snarls—ouch!).

Though the focus is on the girls, it's worth noting that bonding flows both ways. Each session becomes a highlight reel for dads as well as daughters.

"We want everyone who has a young girl in their life, especially dads, to realize that they have the tools to spend time with their daughters doing something that makes her feel beautiful—her hair," Allen says. "And that the style doesn't have to be perfect, because it's really not about the way it looks, it's about the dad telling her she's beautiful, and that he can help empower her to become a stronger person."

Any amusing stories from the shoot?

"DeAngelo is a 'fun dad' and has lots of inside jokes with his girls," Allen says. "His daughter Rhiya was dying to style his hair too, and we let her. She put about a hundred bows and clips in his hair and didn't want to stop!"

Check out the individual web videos below.