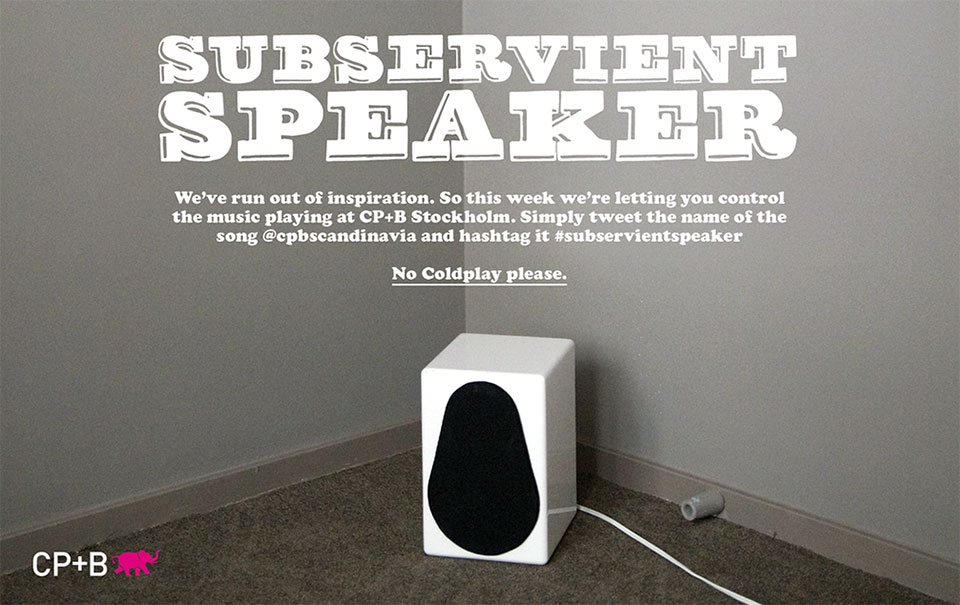 The Subservient Chicken may be long gone, but its spirit of unquestioning obedience lives on at one of the agencies that spawned it.

Crispin Porter + Bogusky's staffers in Stockholm, Sweden, are subjecting themselves to the musical whims of Twitter users this week, in a self-promotional campaign titled Subservient Speaker. Tweet a song title to @cpbscandinavia, with the hashtag #subservientspeaker, and a speaker at the agency will play it.

It's a not-so-subtle nod to the classic Subservient Chicken campaign that CP+B created with The Barbarian Group for Burger King in 2004, featuring streaming video of a humanoid chicken that followed online orders. Last year, a sequel by WPP's David saw the Chicken return, in a commercial, as a defiant prima donna.

So far, the handful of requests under the #SubservientSpeaker hashtag include reasonable picks like the Beastie Boys, Black Rebel Motorcycle Club and Holy Ghost (plus that X Ambassadors and Jamie N. Commons song "Jungle" from all the Beats by Dre ads).

The only rule that CP+B posted: "No Coldplay please." That seems shortsighted, given the wealth of worse options, like Creed. And for an illustration of the potential danger in turning over the DJ keys to the masses, just look at the smartass who immediately demanded, in Swedish, a 200-minute mix of ambient techno from Matthew Hawtin.

Why is the agency bothering with this in the first place? "We've run out of inspiration," reads the promo. CP+B certainly isn't alone in that regard, but it does get kudos for admitting it.