Santa's out of commission. Can you guess who saves the day? 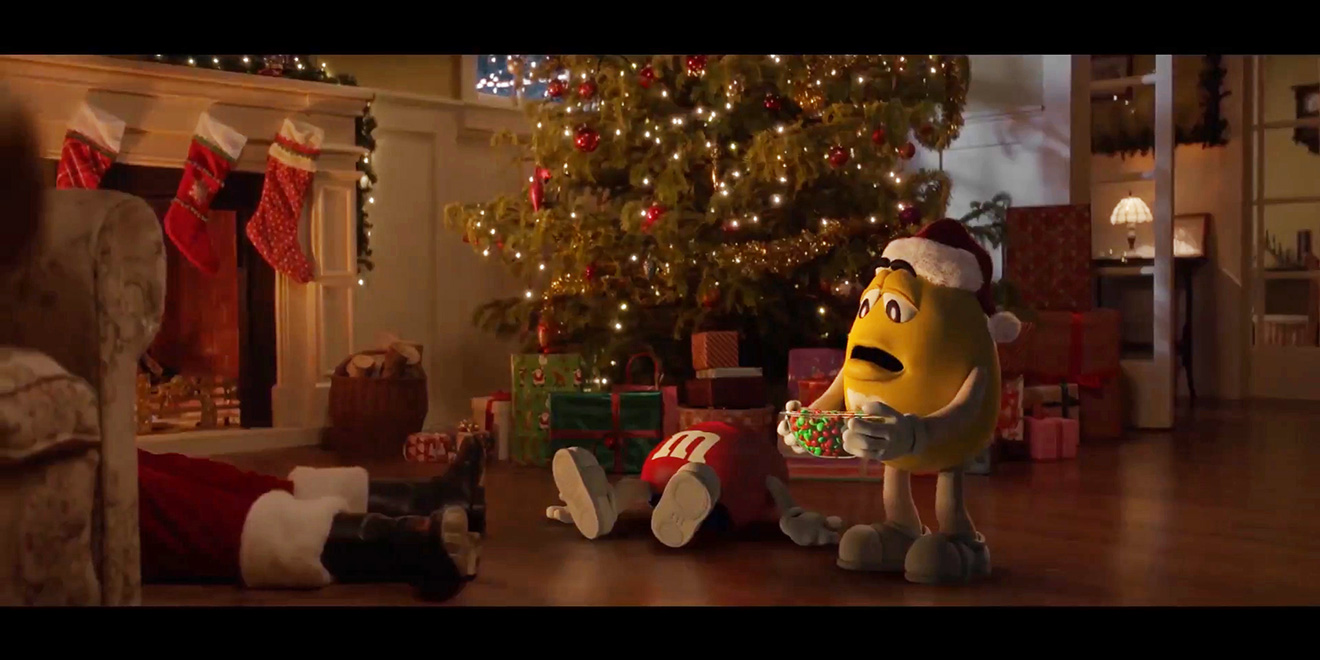 As you might recall, Santa Claus faints dead away when he unexpectedly encounters two colorful M&M’s spokescandies in BBDO’s classic TV spot from 1996. The Red M&M faints, too. All of this leaves Yellow with a concerned look on his face.

It’s a much-loved seasonal serving of consumer culture, regularly regifted on TV screens across the land right around this time of year.

But have you ever ever wondered what happened next? Have you!?

We hadn’t, actually. Nevertheless, 21 years later, the Mars brand has made a sequel that picks up the tale from the moment Saint Nick and Red hit the deck. Reviving Kris Kringle so the holidays could continue apace would have made far too much sense. Instead, Yellow proclaims “I have to save Christmas!” and embarks on a yuletide ride that goes off the rails, as he delivers the wrong presents to people across the globe.

Watch the 90-second spot below, created by CLM BBDO in France, with an assist from BBDO New York, to see how things turn out:

So, Yellow’s goof-up was a blessing in disguise, bringing everyone together to exchange gifts and hugs on Christmas morning. Isn’t that just as heartwarming as chestnuts roasting you know where?

Actually, the spot is so well staged by La Pac director Reynald Gresset that it transcends its own Santafied sappiness—fully appropriate in a Christmas ad anyway—to deliver a merry punch line that hits home with good cheer.

There are lots of visual highlights along the way, too. For example, the M&M’s reflection in the ornament hanging from the tree is a nice nod back to the original ad. And the elves’ high-tech hive of activity, as they monitor Yellow’s journey on a bank of vintage screens, makes for gorgeous eye candy.

“As with any sequel, we’re tapping into the nostalgia and humor of our original holiday campaign, but also adding in a bit more emotion to reach a new generation of fans,” M&M’s brand director Allison Miazga-Bedick tells AdFreak.

“We asked ourselves, ‘What would Yellow do if Santa and Red fainted on Christmas Eve?'” he says. “We knew he’d try to save Christmas, of course, and he’d probably mess it up. Then, we explored what would happen if Yellow gave everyone the wrong gifts. We agreed that everyone would have to come out on Christmas morning and clear up the mess so the whole world could spend Christmas together.”

The crew labored to make the new ad’s opening shots match the look and feel of the original commercial, and Gebler took the technology of the ’90s into consideration when writing the script.

“The story took place in 1996, so we couldn’t use modern smartphones or other technologies that have been adopted in the last 20 years,” says Gebler. “Instead, our director and set designers came up with a sort of ‘Elfin Steam Punk’ look for mission control using old radar consoles, vacuum tube TVs and brass. We thought this was the kind of technology that you’d expect from elves who are known for making traditional wooden toys rather than computers.”

As it turns out, Gebler added his own elbow grease (and sweat!) to the production.

“In the scene where Santa, played by Ray Gardener, wakes up from fainting, we really wanted him to ‘pop up’ fast into the scene,” he says. “But during the shoot, we learned that’s a hard thing to do in a Santa suit. To help, I ended up getting under him and ‘bench pressing’ him into a sitting position over and over again. He was a great sport about it and was willing to do whatever we needed to get the shot right.”