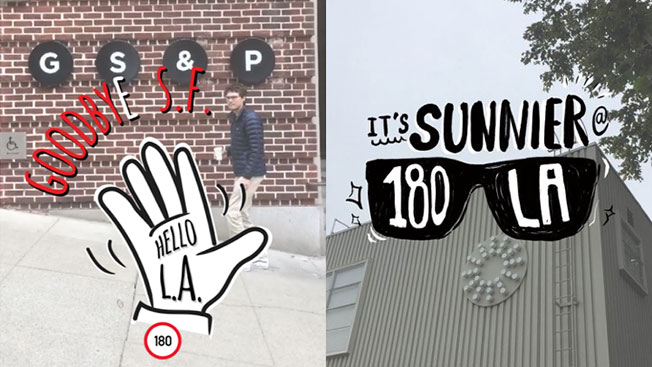 180LA targeted five agencies—72andSunny, Pereira & O'Dell, Deutsch, Goodby Silverstein & Partners and R/GA—as well as the L.A. offices of Facebook, Google and BuzzFeed. (Any decent social media manager is using Snapchat regularly, the agency reasoned.) Content on the agency's Snapchat Story tells viewers which positions are open, instructs applicants on how to apply, and gives 10-second tours of the agency and its view of Ocean Avenue.

In the first 10 hours, more than 40 candidates approached 180LA about the position, and the agency even booked a few interviews. "Let's just say my phone has been blowing up all day," Gregg Louis, the agency's creative recruiter, told AdFreak late Thursday. It's definitely a crafty scheme, but 180LA has dreamed up novel recruiting methods before. (Most notably, it put a recruitment ad inside a Cannes award entry last year.) But the Snapchat stunt is all in good fun.

"We all know recruiting happens," the agency says. "Instead of cold calling like some agencies do, we are taking a different tactic, having some fun with it, and putting ourselves out there in the event someone is interested."