The USA spots were 'kind of a dream' 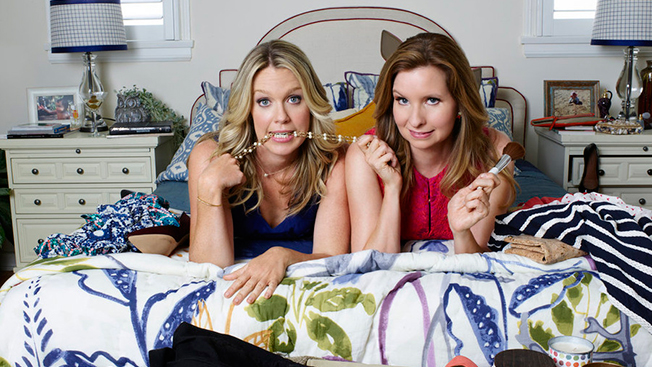 When it comes to product integrations, many show creators grit their teeth and treat them as a necessary evil. But not the two stars and creators of USA's comedy Playing House, who said their branded spots and integrations are some of the best things about the show's second season, which began Aug. 4.

As part of a new VOD windowing strategy in which the following week's episode is available on VOD immediately after each week's linear broadcast, Jessica St. Clair and Lennon Parham starred in and wrote hilarious branded spots for the VOD broadcast's three exclusive sponsors: Toyota, Samsung and Xfinity (which, like USA parent NBCUniversal, is owned by Comcast).

Shooting the branded spots "was kind of a dream," St. Clair said at the Television Critics Association's summer press tour, given that the sponsors let them write the spots themselves. "Literally they just said, this is what we need to refer to, in terms of the product, but you guys can put it in any scenario you want. So with Toyota, we knew we were going to be shooting it at the end of the season, and I thought, 'You know what would be great? If we could get a lot of shirtless firemen washing our car.' So we were like, 'We're going to be at a charity car wash and the car will be featured, but there will be a lot of shirtless dudes.' And they were like, 'That sounds great.'"

When creating the branded content, "our priority was that the spots be as funny as our show," said St. Clair. "Because anytime we're being Maggie and Emma, we want it to be real to the characters. So sometimes you'll see one of these in another show where you're like, 'ugh, I get it, they had to do an ad.' We actually tried to make it as funny as a scene would be in our show; we just happened to be watching the most beautiful curved TV you've ever seen."

It also gave them an opportunity to repurpose some of the show's deleted scenes. "A lot of times it would be a scene that couldn't make it into an episode but we're like, 'Oh, this is perfect, they can just be watching the TV,'" said St. Clair. "And the products were easy to integrate because they weren't weird. They were something every day that Maggie and Emma, our characters, would interact with."

And there were no sponsor objections to any of their scripts or spots, said St. Clair. "That's what's crazy. This should be a nightmare for a creator. This should be an extra thing that we don't have time for, and in fact, it actually helped our show," she said. "I think because we write so specifically, and we reference specific things, it actually isn't hard for us to work products in in a way that nobody would see as, 'Oh, that's product placement.'"

"Since Jess and I started in the commercial world," said Parham, "it felt really natural to do these integrated spots with our partners." Parham once appeared in ads for Kraft Bagel-fuls ("It's a microwavable bagel filled with cream cheese, just pop it in the microwave. It's the best thing you ever had in your mouth!"), while St. Clair said she "used to be the Wendy's salad lady."

And because the partners "were known for innovative advertising," said Parham, Playing House's branded spots and show integrations didn't feel "like an ad campaign."

In fact, some viewers didn't notice the difference between the branded spots and the shows. "People were tweeting the night of the premiere, quotes from our ads," said St. Clair. "I thought, 'This is some sneaky stuff!' But it was working."

The creators also praised USA's VOD strategy for Season 2, which included making Season 1 available to binge on VOD for the month before the Aug. 4 premiere. "Now, we get to be part of this brand new way of watching television, which is really exciting," said St. Clair, who added that some fans had binged on the first season in the past month via On Demand, and then watched the first three episodes at once. "To have that access to people and get their interest and hold it, it was better than we could have ever imagined."