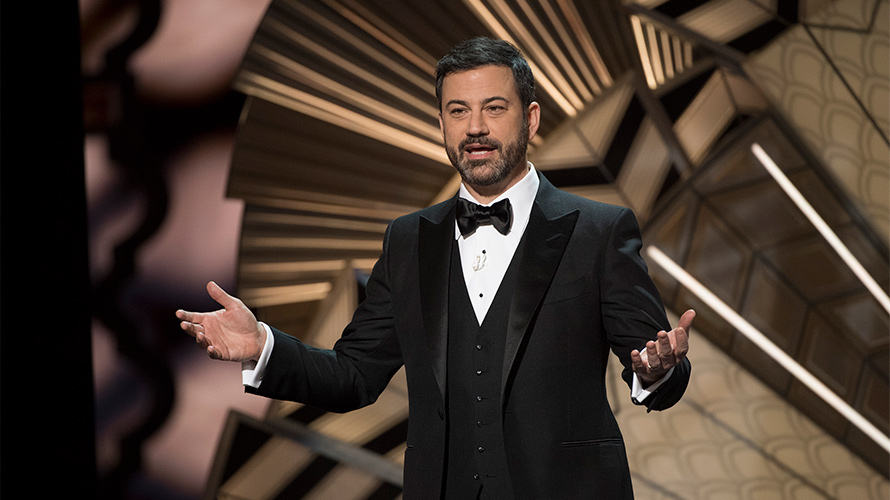 Jimmy Kimmel is returning to host this year’s Oscars on March 4, and he knows the memory of the debacle that capped last year’s ceremony—in which La La Land, not actual winner Moonlight, was incorrectly dubbed Best Picture—will loom large in the minds of viewers.

“If it happens again, literally everyone who works at ABC should be fired,” Kimmel joked to reporters at the Television Critics Association’s winter press tour.

While he’ll have to find a way to address the snafu during his second year hosting ceremony, Kimmel said “a million jokes have been made about this” in the past year. He disagrees with those who said the show was “a Titanic-caliber disaster” because of the mixup, pointing out that “99 percent of the show went very well.”

In the end, he said, it’s important to remember that “ultimately, it’s still just a bunch of celebrities handing each other trophies.”

Kimmel will be tasked with determining exactly how to address the wave of sexual harassment allegations that upended Hollywood in recent months—much like fellow late-night host Seth Meyers did last night at the Golden Globes.

“I felt like Seth made a joke last night that was specifically for me,” said Kimmel, referring to Meyers’ observation that as his first host of an awards show post-sexual harassment scandals, he felt a bit like the first dog sent into space to see if he comes back alive. “I do thank him for being that litmus test.”

The comedian said it’s too early to tell how he’ll approach the topic on the Oscars, which is still two months away. “It’s almost like getting into the hot tub—you can’t tell what the temperature will be like until you get there,” he said.

Kimmel made headlines last year for publicly championing the importance of health care coverage, especially as it relates to children in light of his son’s emergency open-heart surgery at just three days old. However, he doesn’t expect to bring up the topic at the Academy Awards.

“I don’t intend to use the Oscars as a platform for healthcare … unless something major happens that makes me compelled to do it,” he said. “I do think that ultimately you have to remember why you’re there, and it’s not about you.”

Kimmel “likes to be very well-prepared” for the ceremony by watching all of the nominated films, but said he doesn’t think the Oscars audience feels the same way. “Sometimes I think the people in the room haven’t seen a lot of the movies that they’ve voted for,” he said, noting that some of last year’s jokes about nominated films, including Best Picture winner Moonlight, fell flat in the room.

“You just don’t want jokes that people don’t get,” said Kimmel. “It’s one of the positive things about Donald Trump: if you make a joke about him, people understand the reference.”

Kimmel said appearing on the shortlist for Time’s Man of the Year last year “was the most ridiculous thing I think I’ve seen this decade,” adding that he rejects claims that he was responsible for saving Obamacare by spotlighting the topic on his show.

“It’s just such a no-brainer than Americans reacted” the way they did, he said. “Whatever side we’re on, we agree on that, that we should take care of children.”

The comedian was asked about Oprah Winfrey’s rousing Globes speech last night, which has led to speculation that she is considering a presidential run. Kimmel said he’ll campaign for her, but joked: “We would have to call her President Winfrey, you realize that? …I don’t know if we’re prepared for that as a country.”

During his recent cover story, Kimmel told Adweek he was invited back to host this year’s Oscars just one day after the 2016 ceremony. In his interview, Kimmel said he wasn’t sure why he was interested in the Oscar gig, which is high-profile, but also described as one of the most thankless jobs in show business.

“All I know is I’m not somebody who loves a challenge,” he said, laughing. “I’m not one of these people that goes, ‘I am going to train to climb Mount Kilimanjaro.’ But there are certain things as a comedian, as a talk show host, that you can’t say no to. If you want to have this job, you have to say yes to challenges like that. There’s only so many feathers you can put in your cap. Hosting the Oscars is certainly one of them. Hosting the Emmys is another. Hosting the White House Correspondents Dinner, which I did when they still had a White House Correspondents Dinner, was another. The only one left—which is something that, because I’m on ABC, I don’t think will ever happen—is hosting Saturday Night Live.”