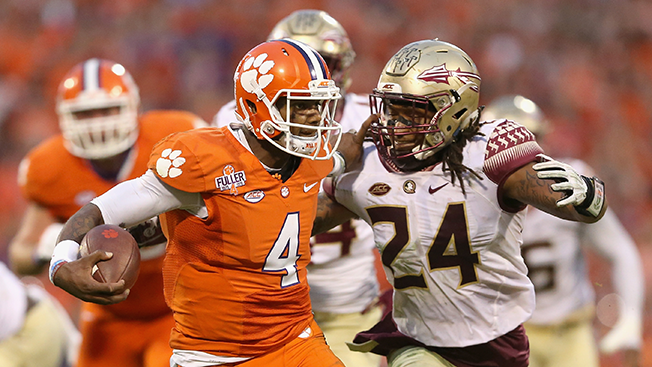 As part of the deal, the ACC extended its media rights agreement with ESPN through the 2035-36 school year. ESPN, which has held the rights to the ACC since 1979, signed a 12-year deal back in 2010 with the league that was reportedly worth $1.86 billion, or $155 million per year. No financial terms of the new deal were disclosed.

"As we thought about our media future, it was important to us that we take advantage of an emerging distribution technology," said ACC commissioner John Swafford in making the announcement this morning at the conference's annual football media day in Charlotte. "ESPN's leadership position in this space will benefit all of our sponsored sports."

The ACC becomes the fourth major college conference to land its own TV network, following in the footsteps of The Big Ten, Pac-12 and SEC; the University of Texas also has The Longhorn Network. Both the SEC Network and Longhorn Network are run by ESPN, while The Big Ten is part of Fox; The Pac-12 wholly owns its network.

ESPN will roll out the ACC Network in two phases: A digital channel dubbed ACC Network Extra, will launch next month with over 600 live events that will be available to ESPN subscribers. The ACC has had its own digital network for the past few years that syndicated some football and basketball games; that network will continue through 2018-19. ESPN won't launch the linear ACC Network until 2019, likely in an effort to package the channel with its other networks, whose carriage agreements don't end for a few years. Raycom and Fox Sports have syndicated rights to the conference through 2027, so the three-year wait gives it time to figure something out.

When the new channel does launch, it will feature 450 exclusive live events, including 40 regular-season football games and more than 150 men's and women's basketball games. While the Longhorn Network and SEC Network were mostly a football play, the ACC Network's true value could lie in basketball.

Despite ESPN's declining subscriber numbers, president John Skipper said he has "complete confidence in our ability to launch this network with national distribution." Like the other college conference networks, ESPN will likely focus on the member school's local markets, primarily along the East Coast.

Despite having college football's runner-up last season with Clemson, the conference only counts one school among Forbes' most-recent list of the most valuable college football programs (Florida State at #17 worth $70 million). When it comes to basketball however, the ACC counts four schools among Forbes' top 10 list: #1 Louisville ($45.4 million); #5 North Carolina ($26.6 million); #6 Syracuse ($26.3 million); #8 Duke ($24 million).

The impending launch of the ACC Network leaves The Big 12 as the only one of the NCAA's five so-called "Power" conferences without its own dedicated network (though Texas is a Big 12 school).