'A big game changer'? Not quite yet 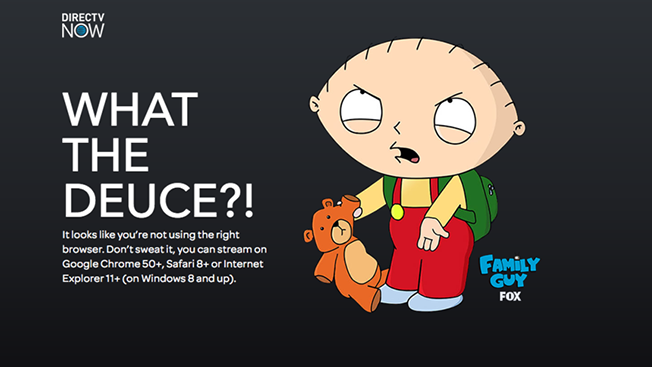 During Monday's press event announcing this week's launch of DirecTV Now, AT&T's over-the-top, streaming bundle service, execs weren't shy about proclaiming the product as the harbinger of a new era in TV.

"We think it's going to be a big game changer," said John Stankey, CEO, AT&T Entertainment Group. Maybe that will be true eventually, but not with version 1.0 of DirecTV Now, which launched on Wednesday.

Adweek has spent the past day testing out the service, which doesn't require a set-top box, satellite dish, annual contract or credit check. The buggy launch makes it clear that AT&T should have spent more time perfecting the product, even if that meant missing the holiday season and getting closer to Hulu's launch early next year of its own streaming bundle service.

"Think of this as the first inning here," said Brad Bentley, evp and CMO at AT&T Entertainment Group at Monday's launch event.

But DirecTV Now feels more like spring training: there's plenty of promise here, but the product isn't ready for Opening Day yet. Here are Adweek's six biggest takeaways from the product after its first day of launch:

1. Signing up takes minutes; actually watching is another matter.

AT&T is targeting the 20 million-plus U.S. households that don't have cable or satellite service by playing up the ease of subscribing: there's no need to schedule installation or pass a credit check.

Indeed, it only took three minutes to actually sign up for the service (though it will be longer if you want to look through the four different plans offered), but after that, the problems began. I signed up on a desktop, and immediately discovered that DirecTV Now doesn't work on Firefox, and the Silverlight plugin needed updating.

The problems continued on mobile: the DirecTV Now app wasn't available in Apple's App Store, though that has been corrected.

2. The mobile experience is terrific. The desktop and connected TV experiences are not.

Stankey wasn't kidding when he said that DirecTV Now was conceived "mobile-first," as the mobile experience is considerably smoother and more enjoyable than using a desktop or connected TV device like Apple TV. On my Apple TV, I was only able to watch for 60 seconds at a time before the screen went white, and I could only hear audio. That problem could only be correct by rebooting the Apple TV device, which would provide another minute or so of video before it went white again.

My desktop browser also required frequent rebooting and restarting, issues I never have while using other streaming services. 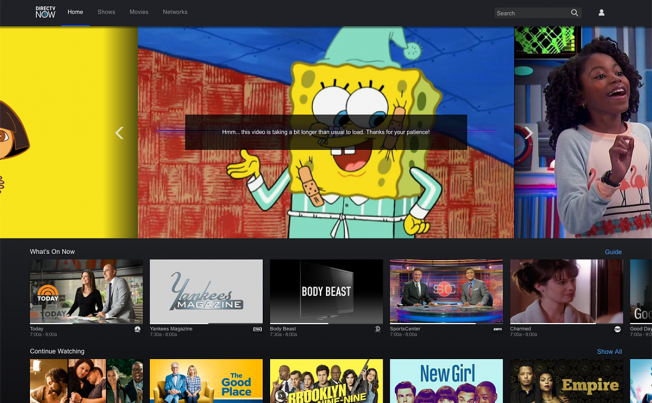 Mobile, by contrast, was a breeze (though the mobile app was offline for a bit this morning). Unless you're an AT&T customer, you'll also be subjected to data charges. The app gives you the option to disable streaming on mobile data, or change the steaming quality from "good" to "better," but you'll want to keep a close eye on your data consumption if you're not on a Wi-Fi network.

3. On-demand episodes are at least a month old.

AT&T said its on-demand options would replicate those offered by the individual networks, where episodes are available to view the day after they air, but almost nothing on the site allows you to watch episodes from the past month. If you want to watch any This Is Us, Westworld, Designated Survivor or Empire episodes from November onward, you're out of luck.

On NBC, the problems are even worse. On-demand episodes of The Good Place are cut off after just 10-15 minutes, while Superstore ended 19 minutes into the episodes.

Several networks currently have no on-demand offerings, including TBS, Discovery, Bravo and SundanceTV.

HBO (which is available as an add-on for $5 per month, with livestreaming access to HBO, HBO Family and HBO Latino) had more current episodes of some shows, but Westworld only had episodes 1, 2, 3 and 6, and the most recent season of Game of Thrones had just a single episode: the fourth.

AT&T said the "majority" of its VOD titles are currently available and the rest are currently being loaded on the site, but no new episodes have been added since Wednesday's launch. And while many channels will offer a 72-hour lookback option, in which subscribers can access programming from the past three days, that rollout has barely begun.

While DirecTV Now claims that users will receive Fox, ABC and NBC access, that only applies to subscribers residing in "owned and operated" markets. Right now, only five markets give you access to those three broadcast networks: New York, Los Angeles, Chicago, Philadelphia and San Francisco/Oakland/San Jose. A few others offer one or two networks, but not all of them.

DirecTV Now says it is working with affiliates to add additional markets, and in the meantime, subscribers will have access to on-demand the day after shows air. Except, as noted above, the on-demand options are a month old.

Even if you reside in one of those owned and operated markets, your hands are tied. DirecTV Now says that NBC's livestream is only available on mobile and desktop devices (no connected devices like Apple TV, and no tablets either), and I had no luck getting NBC to stream on a PC device. I kept getting a prompt that it could only be viewed in fullscreen, but there was no option to watch it that way.

Plus, CBS and The CW aren't available to anyone, regardless of market (more on that below.)

5. You'll have access to almost any network you could want, with a few big exceptions.

DirecTV Now offers four different tiers of channels (you can see the breakdown here), with HBO and Cinemax available for an additional $5 each per month. Almost every network you'd want is included on one of the tiers, with a few big exceptions: all CBS Corp. networks are missing, including CBS, Showtime, The CW and Pop. So you'll have to shell out separately for CBS All Access and Showtime's streaming service if you want those (The CW's app is free).

Of the networks I watch regularly, only two beyond the missing CBS channels weren't included in the base tier, which is called Live a Little. It offers 60-plus channels for $35 a month: IFC (on the second tier, Just Right) and SundanceTV (on the Go Big tier of 100-plus channels, which is offered at the introductory price of $35 a month, down from $60 and the same monthly rate as the Live a Little tier). The curation replicates the Netflix and Hulu interfaces. While DirecTV Now offers traditional program guides for those who want them, it emphasizes its curated offerings, also like using Netflix or Hulu. Shows and series across all networks are grouped together in a variety of genres, with all shows/networks on equal footing.

While that is helpful if you're unsure of what to watch, accessing the individual network pages is more problematic, and requires more work than it should (especially HBO and the broadcast networks, where the bulk of offerings require five or six actions). There's a search bar on top, but it isn't yet all-inclusive.

Because the on-demand options were so old, it wasn't clear what advertising will look like for on-demand episodes that fall within the C3 and C7 windows.

At Monday's event, AT&T said it will be using its AT&T Ad Works division to build what it calls a next-generation advertising platform using all the data insights it will receive from its customers. "We have to find smarter and better ways to deliver advertising" that limits ad load and is better targeted, said Bentley. "This is how we're going to keep pricing down."

But for the moment, there's no evidence of how that will happen.

Again, AT&T says it's working on improving the on-demand feature, and many of the other bugs here are likely to be worked out in the coming days and weeks, while other features are added, like DVR capabilities. I'd advise waiting until that happens, because right now, DirecTV Now isn't ready for prime-time—or any other daypart.