She sees beauty products in your future 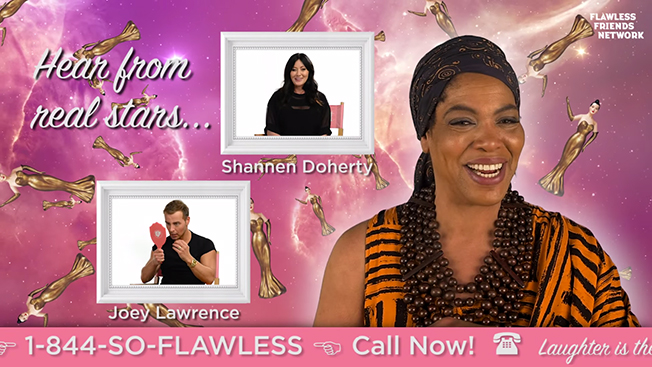 Between 1997 and 2003, you probably fell asleep to psychic Miss Cleo telling you, in her upbeat Jamaican accent, that she could predict your future during her infamous Psychic Readers Network infomercials. Now, this April Fools' Day, the pitchwoman is back. But instead of reading tarot cards, she's trading makeup tips.

Miss Cleo is now apparently shilling for the Benefit Cosmetics Flawless Friends Network, a hotline that compliments your look. And this time, your calls to her number, 1-844-SO-FLAWLESS, won't cost you $9.95 a minute. While she gets it makes fun of her most famous role, she's totally on board with the prank.

"Laughter is truly the best healer," she tells AdFreak. "It's the best way to celebrate. I love to laugh. I think that if anybody takes themselves too seriously, you run the risk of missing out on a lot of wonderful things."

Don't believe her? You can also hear testimonials from Shannen Doherty and Joey Lawrence, who make cameos in the ad. (As for me, I'm a firm believer in Miss Cleo's predictive power. The psychic told me I'm a sensitive soul on my third life, which gives me the ability to take a concept and make it happen at top-level quality. Totally true.)