With split screens and music by Cat Stevens 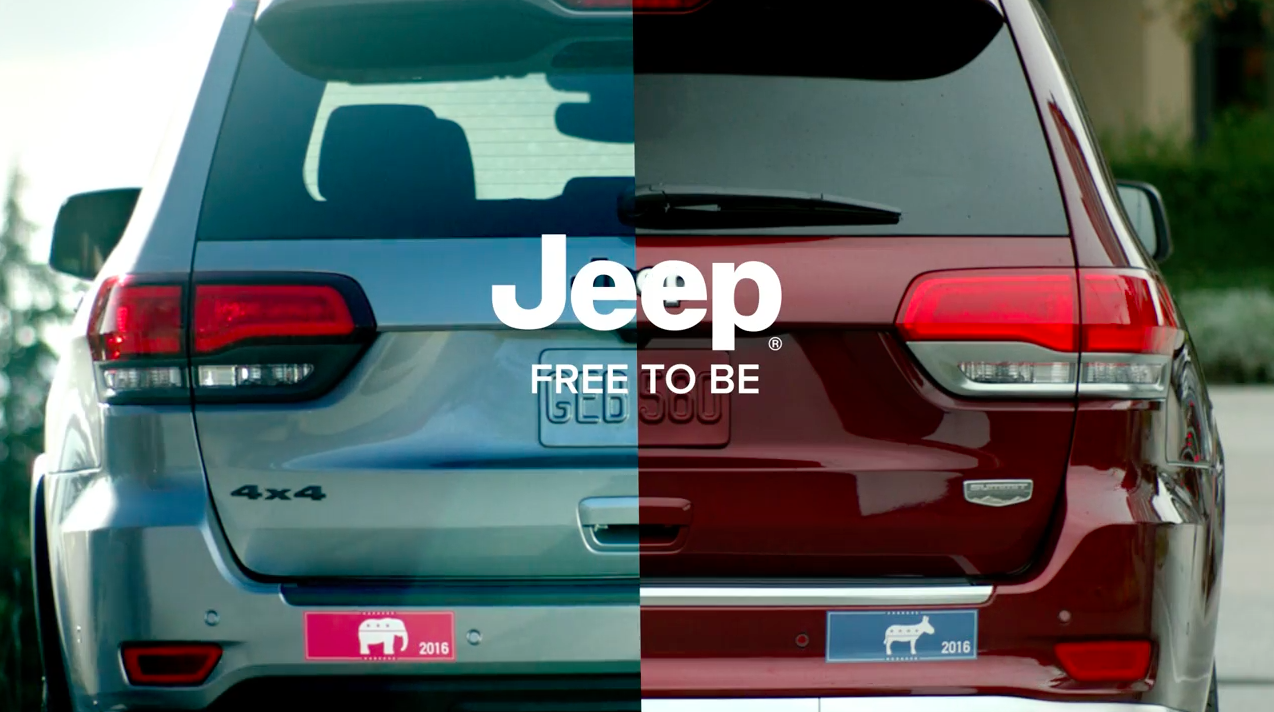 Viewers tuning in for coverage of the third and final presidential debate on Wednesday night will see both sides working together for the greater good, blazing new trails toward a brighter tomorrow.

Alas, we're not talking about the candidates for our nation's highest office. They'll surely snipe and grouse—and in the case of the GOP's nominee, sneer and leer—as usual. Fiat Chrysler's Jeep brand, however, will seek to bridge the gap by launching new election-themed ads on CNN's pre-debate show and MSNBC's pre- and post-debate coverage. (The debate itself is commercial free. How un-American!)

Developed by mcgarrybowen, a quartet of 15-second spots continue the distinctive split-screen visual style Jeep used in the first patriotic installment of this campaign. That ad ran during coverage of the previous two presidential debates, and will encore tonight in a spiffy 30-second edit.

As for the new content, Jeep's soft-sell message of social harmony and unification works hard to cut across party lines. Owners of the off-road Grand Cherokee Trailhawk and luxury Grand Cherokee Summit models consistently find common ground in various vehicle features, such as the Parallel Park Assist system, which is the focus of the ad below:

"We wanted to bring to life the two 'souls' of the brand—the freedom upon which the brand has been rooted since 1941, and the adventurous American spirit that propels the brand forward today," says Fiat Chrysler CMO Olivier Francois, who was recently named Adweek's 2016 automotive Brand Genius for his efforts on Jeep. "The split-screen concept as a means to underscore that duality was one that intrigued us from the start, but we couldn't do split screen without purpose. The launch of the two new Jeep Grand Cherokee models was the perfect opportunity."

As for the political bent, he adds, "the presidential campaign allowed us to add one more dimension, or another layer."

In the next ad, we learn about Quadra-Lift Air Suspension, a progressive feature that even conservative drivers can love:

According to Francois, the debates give Jeep "one of the biggest stages after the Super Bowl this year, but with a very different level of cost." Ads running during debate coverage are selling at a fraction of the Big Game's nearly $5 million price tag for a 30-second spot. (Jeep created two notable commercials for Super Bowl 50 last February, "4x4ever" and "Portraits." The latter won the Super Clio for best ad in the game, and was Adweek's pick too.) And while the Super Bowl delivered an audience of about 112 million, the three debates combined will handily beat that figure. (In fact, the first two Clinton-Trump meetings already lured 145 million viewers combined.)

Next, let's check out Lane-Departure Warning and Blind-Spot Monitoring, which sound like they'd come in handy during debate prep:

And finally, it's plain to see that Selec-Terrain technology helps candidates of all stripes navigate those inevitable bumps in the road:

Given the consternation in some circles over Cat Stevens' conversion to Islam, the hippie-dippy song choice for the campaign has raised some eyebrows, but Francois prefers to focus on the message rather than the messenger.

" 'When You Want to Sing Out, Sing Out' was intended as anthem to respect and peace when it was written in 1971," he says. "The song's message still holds true today."

Remember, regardless of our differences, we're all Americans, so it really doesn't matter if you're on the left or right. (Unless, of course, you're actually driving at the time.)

For some, the political thrust may seem like a stretch, but it's timely, and makes sense given Jeep's heritage as a can-do American brand. (Yes, it's manufactured by an Italian automaker nowadays, but you can't have everything, capisce?)

And by the way, Jeep should feel free to bring back "presidents" Martin Sheen and Bill Pullman in its ads any time. Grazie!