Cancer-Stricken Fan Thanks the Denver Broncos in Amazing Newspaper Ad 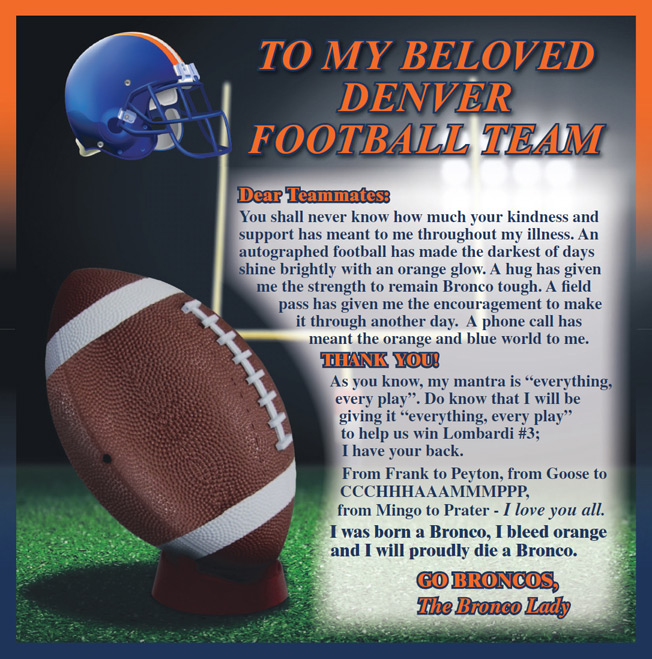 All the pre-game hype and multimillion-dollar TV buys can't put the Super Bowl and sports fandom in perspective as sharply as this newspaper ad from Kara Christian, a 58-year-old Denver Broncos fan stricken with breast cancer.

The longtime season-ticket holder has followed the team since she was 5, back in 1960, when the Broncos played their first game, and she regularly attends contests at Sports Authority Field at Mile High wearing a big orange wig. She's the kind of ardent fan who arrives at games early to greet home-team players with hugs as they walk to the locker room.

Christian, whose prognosis is terminal, received a field pass for the AFC Championship Game in Denver and a football signed by every Bronco. To say thanks and spur the team to victory in the Super Bowl, she took out a half-page ad in the sports section of Saturday's Denver Post.

She writes: "You shall never know how much your kindness and support has meant to me throughout my illness. An autographed football has made the darkest of days shine brightly with an orange glow. A hug has given me the strength to remain Bronco tough. A field pass has given me encouragement to make it through another day. A phone call has meant the orange and blue world to me." She closes: "I was born a Bronco, I bleed orange and I will proudly die a Bronco," and signs the ad "The Bronco Lady." (Christian qualified for two Super Bowl tickets in the team's season-ticket lottery and plans to attend the game.)

She opens the message by addressing the Broncos as "teammates." This speaks to the intense, intimate bond that die-hard fans have with our favorite teams, ties that inform and enrich our daily lives in ways causal fans can't understand. In our hearts and minds, we're part of the team. We rise with each victory, sink with each defeat. Some say sports isn't life and death. For true believers, it's nothing less. In the best cases, this energy flows in both directions, giving strength to fans and players. It's a spiritual experience that transcends the cynicism of celebrity, contracts and even commercials.