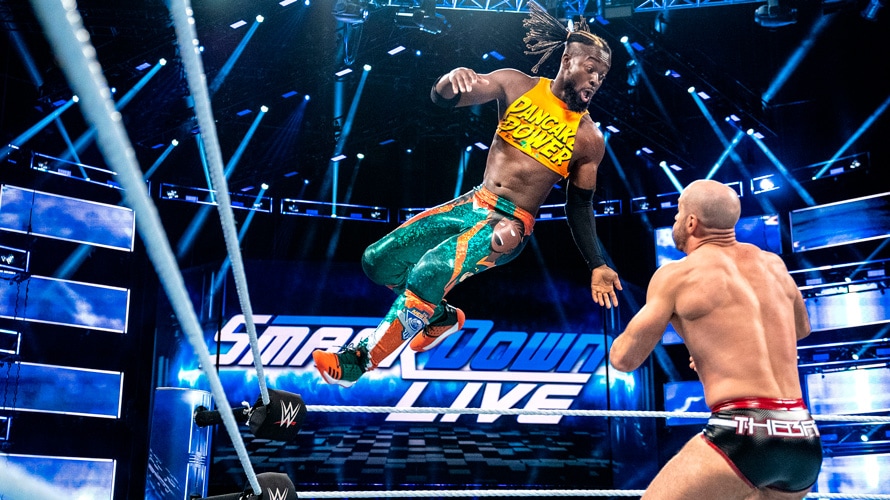 As it moves from USA to Fox, SmackDown Live has been renamed Friday Night Smackdown. WWE

None of the new fall broadcast shows have made much of a splash so far, but Fox is looking to break that streak on Friday when it brings WWE’s SmackDown Live to broadcast for a five-year run.

The program, which will now be known as Friday Night SmackDown, debuts Friday on Fox with a 20th anniversary celebration, featuring past and present WWE superstars like Dwayne “The Rock” Johnson, Mick Foley, Hulk Hogan, Trish Stratus, Goldberg and Ric Flair. Fox Sports has been spotlighting the program’s arrival in a new campaign from Wieden + Kennedy New York, which shows how WWE celebrations have permeated popular culture.

And while Fox Sports is overseeing Friday Night SmackDown, the company’s sports and entertainment ad sales teams have both been working to line up advertisers and sponsorships for the program, which will air 52 weeks a year.

In June 2018, Fox snapped up the rights to SmackDown, which had aired on NBCUniversal since 2010, starting on Syfy, and moving to USA in 2016. This is the first time SmackDown is airing on a major broadcast network since it left The CW in 2008. (Meanwhile, USA will continue to air WWE’s other flagship series, Raw, on Mondays, and is filling the SmackDown void with another WWE property, NXT, which previously aired on the WWE Network.)

“Think of what Thursday can do to build Friday to build Saturday,” Fox Entertainment CEO Charlie Collier recently told Adweek. “And then we’ve got Sunday football to promote Animation Domination [Fox’s Sunday night animation block]. It really is powerful sports promoting more sports and then using the sports to elevate the entertainment.”

Progressive will serve as SmackDown’s presenting sponsor, and the program will showcase other brands including Paramount Pictures and Pizza Hut.

While Fox’s telecast won’t necessarily feature more integrations than the USA version did, “you’ll see different types of integrations, depending on the advertisers and what their needs are,” said Winter, who is working with the WWE production and writing teams on those partnerships. “We have dozens of different advertisers with whom we are in various stages of conversation regarding how we can work with their brand.”

Unlike the other Fox Sports properties, which air on a seasonable basis, “we’re always on with this property,” Winter said. “There’s no ebb and flow here.”

Because Friday Night Smackdown will run year-round, some of the partnerships will be yearlong, while others will have more specific windows, depending on a specific movie or a QSR product launch. “It’s a moving, very kinetic environment,” said Winter.

Buyers are also bullish about SmackDown’s move from cable to broadcast. “We’re high on SmackDown. I love Friday night, I love it for family coviewing, I love the platform that they have promoting it,” said Carrie Drinkwater, executive director, integrated investments at MullenLowe’s Mediahub.

“I believe that it will continue to perform well because of the loyal audience that it delivers, regardless of where it airs,” said Maureen Bosetti, chief partnerships officer at Initiative. “It’s a good move for Fox, because it brings in a different audience, too. The ratings for men 18-34 and 18-49 are among the best in all of television outside of the NFL, so it should continue to do well.”

Still, Winters knows that some brands will want to see how SmackDown fares on Fox before diving in. “Some people want to take a little bit of a wait and see based on the performance of the show, which we are supremely confident in,” he said. “Once we start racking up healthy ratings, healthy deliveries, I think you’ll see an overabundance of people who were on the fence jump on the other side.”

Another advantage to SmackDown airing year-round is “in real time, we get a read on what our audiences like,” Winter said. “The WWE does an extraordinary job of responding to that; that’s why we’re so confident that the show’s going to be so successful.”

Winter wouldn’t comment on how Fox’s SmackDown CPMs compare to NBCUniversal’s for the show’s USA run, but made it clear that they are higher that brands previously paid.

“As a prime time entertainment vehicle on the Fox television network, we’re getting premium CPMs right in line with other Fox entertainment and sports properties. So we are very much in the premium business,” Winter said.

WWE is eager to take advantage of SmackDown’s move to a larger, broadcast audience. The company’s overall sponsorship revenue has quadrupled since 2010, and was up 20% in 2018 year over year, said John Brody, WWE evp, global sales and head of international, whose team is co-selling SmackDown’s sponsorships with Fox Sports.

“We like to say we’re in that unique pivot point between sports and entertainment. We deliver like live sports, but we also deliver like some of the best dramas on television,” Brody said. “We’re always looking for ways that will drive more opportunity for our broadcast partners. And most importantly, drive more excitement and sticky content for our fans.”

If buyers have any questions about SmackDown’s shift to Fox, they are around how the show will differentiate itself from WWE’s sibling series, Raw.

“They’re just going to have to make sure that they are balancing the two programs in terms of talent and story arc, so that it does have appeal to that potentially more mainstream, broader audience,” said Nick Hartofilis, evp of national investment, Zenith.

The answer to how WWE will accomplish that should come next week, as the company holds a draft for its superstars, to determine whether they will go to Raw or Smackdown. That draft will begin Oct. 11 on SmackDown and conclude three days later on Raw.