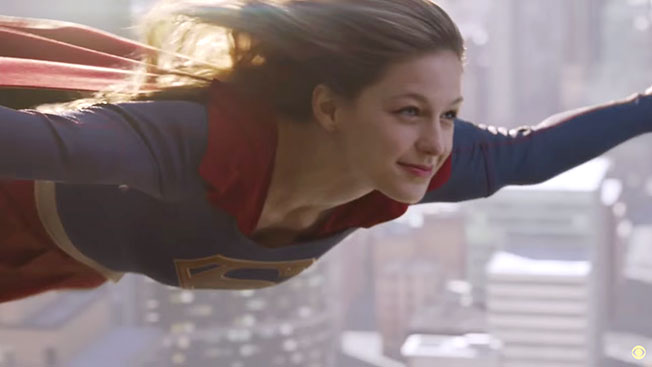 George Schweitzer has spent 20 years overseeing the trailers for the new shows CBS unveils at its upfront presentations each May. "It used to be we showed them in Carnegie Hall, and then we put them away for a while," recalled Schweitzer, president of CBS Marketing Group. But as the networks began releasing their upfront trailers online in recent years, he said, "Now, it's shown in Carnegie Hall, and five minutes later, it's going around the world."

Yet, not even an upfront vet like Schweitzer was prepared for the astounding global reaction to CBS' trailer for Supergirl, one of fall's most eagerly anticipated new shows, after it debuted at the network's May 13 upfront. His group consulted with The CW's marketing and press teams who offered guidance on launching a superhero project. "We were warned that this thing would go viral quickly," said Schweitzer, and that's just what happened. Within two days, more than 5 million people had viewed the trailer online. A week after its May 13 debut, that number has risen to more than 10 million.

The 10 million figure eclipses the total views of all the other CBS, ABC, NBC and Fox upfront trailers combined. "It's unbelievable," said Schweitzer. "That's more than [the audience for] some of our shows."

The last time CBS debuted a superhero series, 1990's The Flash, "there was no Internet," said Schweitzer. "So we've never seen any reaction like this. What do we know? We do crime procedurals and Chuck Lorre sitcoms."

Even Supergirl executive producer Greg Berlanti, whose superhero shows Arrow and The Flash had generated plenty of early enthusiasm, was taken aback by the response. "I wasn't at upfronts, so I saw the trailer online when everyone else did," Berlanti said. "I was totally charmed and incredibly excited it's getting so much attention."

The secret to the trailer's online success? "We wanted to make sure we captured three things: heroics, humor and heart," said Schweitzer. "Because, to us, that was the essence of Supergirl." With a running time of more than six minutes, it's also one of the longest upfront trailers CBS has produced. "But we really felt we wanted to show both sides, the relationship, emotion, female-empowerment side, and then action—hey, superhero fans, here's this, too," he said.

Also key is the quality of the pilot itself, according to Schweitzer. "If it's not in what they give us, it's really hard to make a great trailer."

With the May 13 upfront date looming, Supergirl's trailer was cut in just two weeks by CBS' L.A.-based, in-house creative team, after they received the completed pilot. "It's a collaborative process," said Schweitzer, with everyone from the drama development team to CBS Entertainment chairman Nina Tassler to CBS Corp. president Les Moonves weighing in on the trailer, which was finished just two days before the upfront to allow enough time for the final sound mix.

Still, it wasn't without its detractors, including some who compared its relationship-centric first half to Saturday Night Live's recent Black Widow sketch. Berlanti hopes skeptics will reserve judgment until they watch the pilot. "There is just as much or more action in Supergirl as there is in any show we have with a male lead," said Berlanti.

Response to the trailer shows how the upfronts—and the upfront trailers—have evolved into a phenomenon that reaches far beyond the advertisers and buyers who assemble in New York each May. "The upfront has become the pre-premiere for all the networks," Berlanti said. "This has become much more than just some kind of inside-the-industry thing. People know what the upfronts are."

While the upfront trailer got Supergirl's marketing campaign off to a stellar start, "we take absolutely nothing for granted," said Schweitzer. "Obviously, Supergirl has a built-in following, but we are appealing much broader than that. We will appeal to the widest audience possible."

That is music to Berlanti's ears. "I believe CBS are true masters at what they do and trust them to get an audience to the show the way they do with all their hits," said Berlanti, who will also have NBC's Blindspot and The CW's DC's Legends of Tomorrow next season for a total of six series on the air. "We knew they could get audiences to sample the show and that then it will be on us to make a show good enough that folks want to come back."

Because Supergirl won't premiere until November, after CBS shuffles its schedule when Thursday Night Football winds down, Schweitzer will be able incorporate footage from subsequent episodes into the show's fall marketing campaign.

"We want to make everyone excited and interested and looking forward to watching the show," said Schweitzer. "So, this is just the beginning."