But will media partners join him? 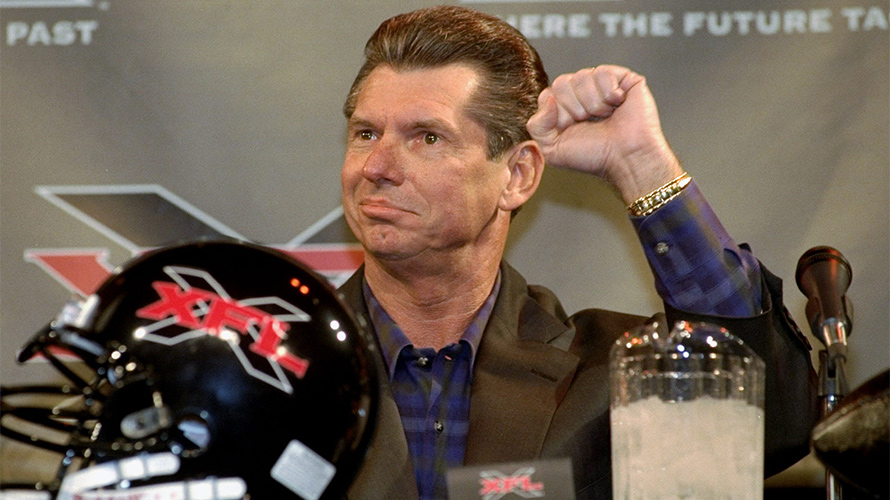 XFL is a previously defunct American professional football league that played a single season in 2001—until now.
Share
By A.J. Katz
|
January 25, 2018
Share

WWE chairman and CEO Vince McMahon is stunning the sports media world by giving professional football a second try. Less than a week after making an appearance on the 25th anniversary broadcast of WWE Monday Night Raw, McMahon announced the creation of the new XFL.

XFL is a previously defunct American professional football league that played a single season in 2001—until now. Kick-off will take place in late January or early February in 2020 (traditionally the approximate time of the Super Bowl). The league is backed by McMahon’s Alpha Entertainment, which filed trademarks for “XFL” last month, according to U.S. Patent and Trademark Office records.

Comprised of eight teams with 40 man rosters playing a 10-game regular season schedule, the new XFL will involve two semifinal games and a championship game. There will be no crossover between WWE and XFL in regard to talent, so don’t expect to see Seth Rollins in pads.

“We want to re-imagine the game of professional football,” McMahon said on a conference call with reporters. “As you know, there is a wealth of talented players out there, and we want the quality of the human being to be as important as the quality of the player.”

It’s very early days for the venture; McMahon said that the new XFL does not have any TV partners lined up, but did mention that the league “will be considering new ways of presentation.” Fans can watch the games on big screens and mobile devices alike.

But why now, over 15 years after the original XFL’s last game? “Football is America’s favorite sport, and there are currently seven months out of the year without football,” said McMahon. “So why not? Now it the perfect opportunity, and I’m excited to bring the XFL back.”

The launch of a new football league is controversial for a number of reasons, namely due to the backlash surrounding the NFL’s handling of concussion protocols and the increasing cases of CTE in players, past and present. When asked about this on the call, McMahon said, “We will make this as safe as possible, but we still want it to be football. We will bring in experts. We will listen to medical experts and heed their advice to make it as safe as possible.”

McMahon will likely have at least one high-profile supporter for the new venture: The President of the United States. Not only does President Trump loathe the NFL, but he and McMahon are longtime friends, with the commander in chief appearing on Raw, Wrestlemania and on many other WWE events over the years. Pres. Trump also appointed Linda McMahon head of the Small Business Administration.

“I have no idea whether or not President Trump will support this,” said McMahon when asked about his relationship with the administration. “I want to make clear that this has nothing to do with politics or social issues.” But he is requiring all players to stand for the Star Spangled Banner.

Trump’s history with pro football is well-known. In 1984, he bought the New Jersey Generals, part of the then-new United States Football League, before the league disbanded two years later. The original XFL launched in 1999 as a joint venture between McMahon’s WWE (then WWF) and NBC Sports, then led by Dick Ebersol. The WWE was riding high at the time, and McMahon wanted to bring the brand’s Attitude Era to pro football. This meant play that was far more physical than that of the NFL, combined with adult themes, including team cheerleaders clad in skimpy outfits.

That said, it doesn’t sound like this will be the case with the new XFL, though like the original, the new XFL will sport eight teams in two divisions.

There will surely be skepticism around the new venture, considering the old XFL’s short existence and its problems from the get-go. First, it was rushed to NBC, and early broadcasts experienced more than a fair share of technical difficulties. Play was poor and practices were few. The league ended up changing the rules in the middle of the season. NBC got uncomfortable, and once it pulled its support, McMahon’s experiment was over—or so we thought.

Pro football is under fire right now, and it will be interesting to see how the new XFL does. McMahon was relatively tight-lipped on the call, but if the past is any indication, the venture will have its work cut out.