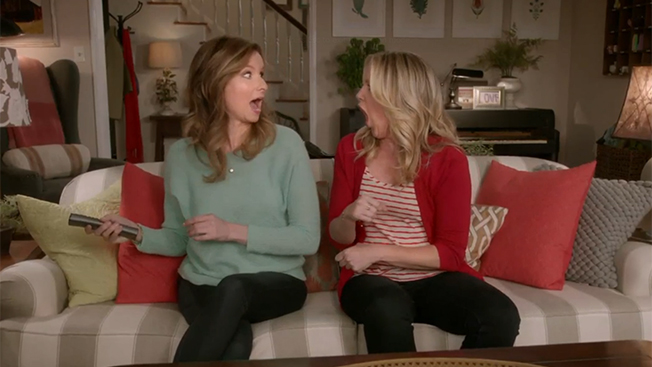 All summer long, networks have been devising unique methods of presenting their series to help audiences more easily consume content while helping advertisers reach viewers. Tonight, USA rolls out one of the season's most ambitious moves yet.

As the comedy Playing House returns for its second season tonight at 10 p.m. ET/PT, USA is debuting a new windowing structure in which viewers can watch the following week's episode on VOD immediately after the broadcast. The VOD episodes, exclusively sponsored by Toyota, Samsung and Comcast (which owns USA parent NBCUniversal), include custom-created spots from those three brands.

Adweek has the exclusive first look at the spots from Toyota and Comcast. A 60-second version will air alongside one for Samsung in tonight's premiere on USA; the full-length versions will appear during VOD playback of the episodes.

In the Toyota spot, Emma (St. Clair) and Maggie (Parham) take a drive in Emma's Camry (or as she calls it, "Cams"), and argue about the car's voice recognition features. (Maggie takes exception to Emma calling the car "kind of like the best friend I ever had.")

In the Comcast spot, the two women experiment with Comcast's X1 voice remote, with Emma testing the limits of the remote's capabilities.

"Being a part of Playing House was a natural fit for Toyota, especially given our long relationship with NBCUniversal and their family of networks," said Dionne Colvin Lovely, national director, traditional and emerging media, Toyota. "Our integrations, which we think will hit home with the show's viewers, are intended to be funny, while still allowing us to showcase the Camry in a meaningful way."

Parham and St. Clair have been enthusiastically promoting USA's new Playing House advertiser strategies for several months. During upfronts, they filmed several videos that played for buyers and advertisers, including one that explained upfront acronyms.