Hulu’s Pause Ads Move Out of Beta, With More New Formats in the Works

Next up are binge ads, with a ‘transactional’ rollout planned for 2020 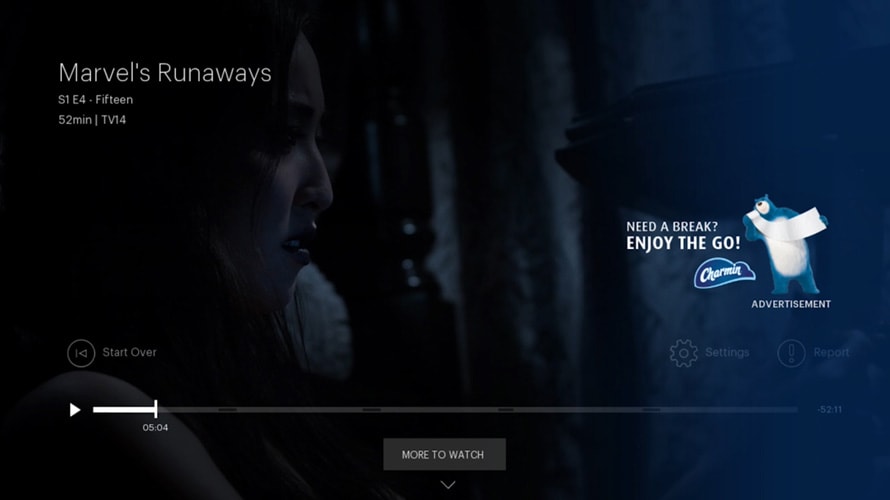 Hulu's pause ad format is rolling out to all advertisers this month.
Hulu
Share
By Kelsey Sutton
|
September 23, 2019
Share

Hulu has already announced two new ad formats this year—pause ads, which are activated when a user hits the Pause button; and binge ads, which tailor their content to viewers’ streaming behavior. As its pause ad offering moves out of beta, the streaming service is now working on other formats, including a “transactional” one that will direct viewers to a second screen to interact with advertisements.

The new offering, which Hulu head of advertising platforms Jeremy Helfand said is being called a “transactional ad format,” will allow viewers to use another device to interact with a brand’s messaging on their own terms. That could include anything from looking up more information about a brand to purchasing an item directly; the format is intended to work for any point along the marketing funnel.

“That way, you minimize the disruption to the storytelling experience, but you are also able to engage at a level where the brand is going to be allowed to help achieve their objectives,” Helfand said.

Development of the transactional format is still in early stages, but Helfand expects them to start rolling out early next year. In the meantime, Helfand and the ads team at Hulu have plenty of work to do.

This month, Hulu’s pause ad is coming out of beta testing with Charmin and Coca-Cola, and is rolling out more broadly to advertisers. The format, which displays an advertisement when a viewer pauses programming but disappears when programming starts back up, has attracted “broad interest” across the market, Helfand said, especially from brands in the consumer packaged goods, insurance, fast food (QSR), retail and telecom sectors, along with several direct-to-consumer brands.

According to Helfand, in a case study conducted during the beta stage by firm Kantar Millward Brown, the pause ad resulted in a 68% increase in ad recall, five times the industry benchmark compared with similar executions. Because Hulu viewers pause content an average of 30 million times a day, there’s plenty of opportunity to serve ads to them without interrupting the viewing experience, Helfand said.

The company is also prepping a beta test for its previously announced binge ad, which will give advertisers the ability to offer a binge-watching viewer rewards or offers. That ad format will roll out this year in the same way that the pause ad did: first with a beta test featuring a few brand partners, then introducing the format to all of the advertisers on the platform. Hulu first announced both the binge and pause ad formats during its NewFronts event in May.

When developing new formats, Helfand said Hulu thinks about creating them in four distinct categories: situational-based ad formats, where viewers engage in a specific activity that a brand can respond to; choice-based ads, where viewers are asked to interact with an ad and select certain options on the screen; transactional ads; and integrated story opportunities.

Hulu has already made headway with a few of those categories, including the binge ad and pause ad, which are considered situational-based formats, and choice-based ads, which Hulu has already introduced with an interactive branded entertainment selector and an ad selector.

Along with the development of transactional ads, Helfand is hoping to innovate more with the integrated story opportunities.

“There are ways to do more to integrate the brand into the content, either in the content itself or around the canvas where the content is being delivered,” Helfand said. “You should expect to see more innovation around that category from us.”