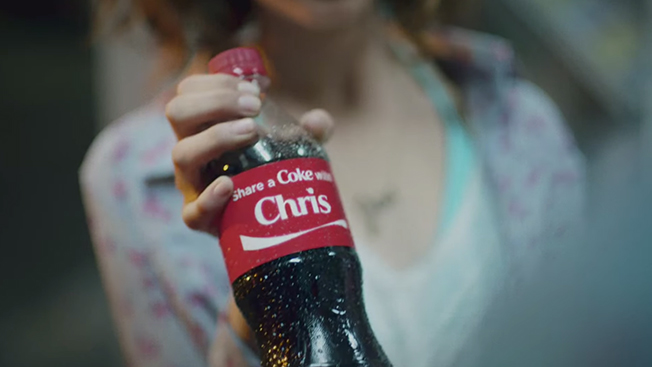 Coca-Cola Co. is seeing sales rise for the first time in more than a decade, thanks to its personalized bottle campaign, reports The Wall Street Journal.

The "Share a Coke" campaign was first launched in Australia in 2011, with the local executives and the ad agency Ogilvy coming up with the idea. In the years since, the campaign has spread to more than 70 countries, including a U.S. launch this summer.

While Coca-Cola isn't releasing its official sales figures ahead of the planned earnings call in late October, the Journal cites sources who are claiming sales volumes are up 0.4 percent for 12 weeks through August of this year, compared to the same period last year, and that sales dollars are up 2.5 percent overall—all after more than 10 years of steady declines. Those sources also noted that sales at Coca-Cola's biggest rivals—PepsiCo and Dr Pepper Snapple Group—have remained in the negatives. Coca-Cola is increasing its advertising budget by $1 billion in the next three years; its budget was $3.3 billion in 2013.

The campaign was never intended to mark a permanent change to the soft drink bottles, and already, Coca-Cola is beginning to phase them off shelves. But a senior brand manager for the company has said there will be "serious consideration" given to bringing it back again in the United States next summer.

"At the end of the day, our name is the most personal thing we have. It's our fingerprint…our identity…in one word," said Lucie Austin, one of the original brand executives in Australia to launch the campaign, and who now runs marketing for the Northwest Europe and Nordics business unit at Coca-Cola.

"We gave consumers an opportunity to express themselves through a bottle of Coke, and to share the experience with someone else. The fact that your name is on a Coke bottle, it can't get more personal than that! The campaign capitalized on the global trend of self-expression and sharing, but in an emotional way. Coke is big enough to pull off an idea like this, which speaks to the iconic nature of the brand. Who would want their name on a brand unless it was as iconic as Coke? 'Share a Coke' found the sweet spot by making consumers famous through the most iconic brand in the world."