The New York Times: All of the Tweets That Are Fit to Print

The newspaper's redesigned A2 and A3 print pages include a Spotlight section, where tweets will often be featured 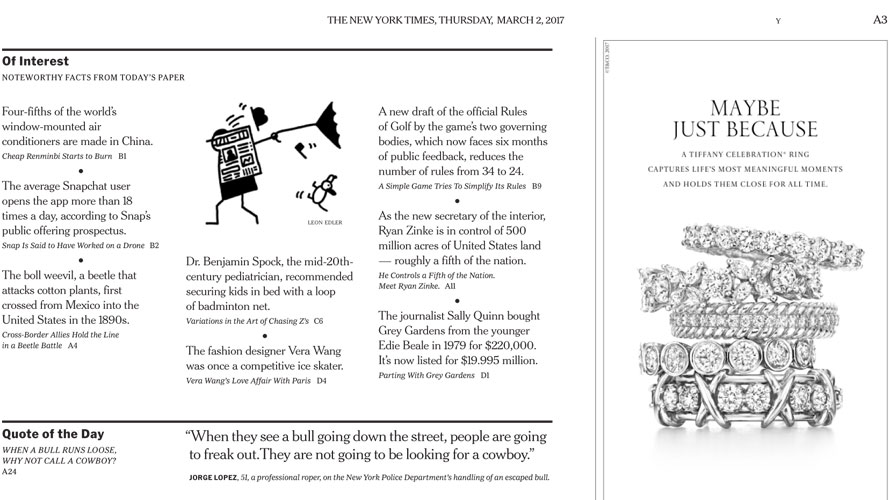 Putting tweets in print may seem like reverse-engineering, but that’s exactly what The New York Times is doing as part of the redesign of its A2 and A3 print pages, introduced late last week.

The newspaper said in a press release that the revamp of those print pages was aimed at giving readers an overview of print and digital content in the style of the “front of the book” in magazines, adding that features will include:

Tweets from reporters will be included in the Spotlight section, when applicable.

The New York Times Magazine editor in chief Jake Silverstein spoke with Laura Hazard Owen of NiemanLab about the changes, and highlights follow:

We also recognized that there were some important functions this page could play—not only warming people up, but offering a dashboard of the huge scope of activity that’s going on in the world of The New York Times on any given day. That scope has expanded in recent years to take in not only what’s happening in the print paper and videos and podcasts and various institutional social media accounts, but also our live journalism and all of our journalists’ own social media accounts.

Much of that was never captured in our more formal products. There wasn’t a single place you could go to see all that. We felt that, with judicious curation, we could present an overview of the highlights from all the different areas that now constitute what the Times is doing.

The place that will have that sort of thing is the Spotlight section. (Last Thursday) it had this post from T magazine’s Instagram account, but it will often feature a tweetstorm. Rukmini Callimachi is often doing important journalism in her tweet threads, too. Often, that stuff works its way back into a news story the next day or the day after, but there’s something fresh and urgent about what people are posting on social media that will pop up in that section.

One thing that’s been cool on this project is seeing how print and digital can be friends. They can work seamlessly. Print has a curatorial function, because there’s a limited amount of space and a need to arrange things on a page that looks good, and that forces you to make cuts and put emphasis on certain things. It’s not that people can dump anything on the website, but having unlimited space changes the way you approach things. The curatorial quality to print is useful, and in this case, it’s given us a sense of how to arrange information that can be useful to us on our digital platforms as well.