'It is time for you to get your groove back' 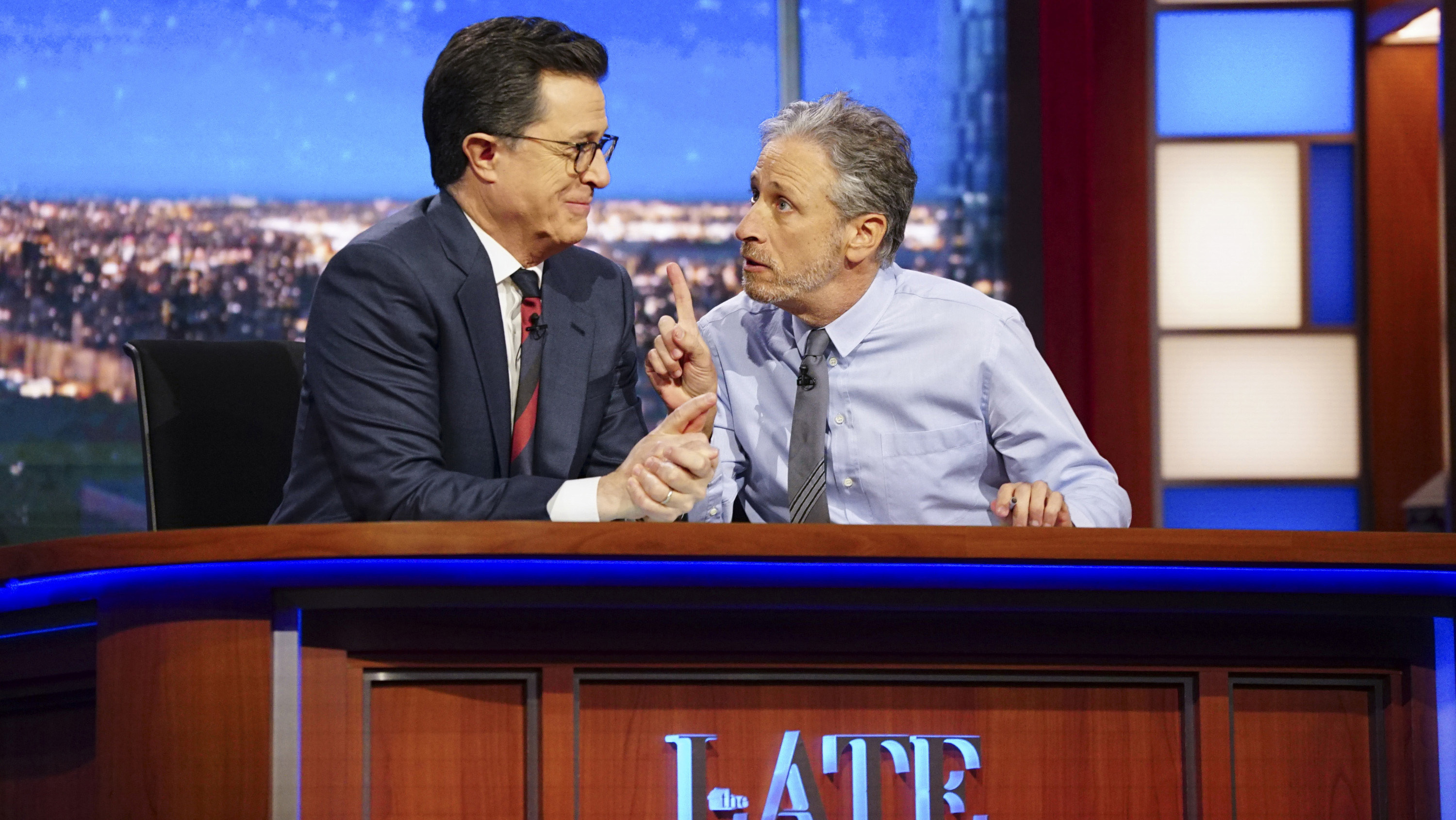 This was Jon Stewart's sixth appearance on The Late Show, where he is also an executive producer.
Richard Boeth/CBS
Share
By Jason Lynch
|
February 28, 2017
Share

For the first time since he left The Daily Show in August 2015, Jon Stewart admitted that he misses life behind a late-night desk.

“Yes, I miss it!” he said during Monday night’s Late Show with Stephen Colbert, after he popped up from behind Colbert’s desk to chime in about Donald Trump’s attacks on the media. “I have a tunnel that I’ve built straight from my farm,” Stewart explained of his appearance. “I spend the whole day yelling about Trump to the animals. We have a barn spider [that] wove, ‘Please get a job,’ into the web.”

So Stewart borrowed Colbert’s desk, much as he did last summer when he criticized Trump and Roger Ailes, to tear into Trump for his claims that the media is dishonest. “Trump lies more in one press conferences than CNN does in a year, and this is coming from a guy who as you know, hates CNN!” said Stewart.

After touching on some of Trump’s biggest falsehoods (that he had the “biggest electoral college win since Ronald Reagan,” that the U.S. murder rate is the highest it’s been in 47 years, and that “I am the least anti-Semitic person that you’ve ever seen in your entire life”—Stewart retorted, “you’re not even the least anti-Semitic person in the clip we showed!”), Stewart explained that he knows Trump is “lying on purpose,” because “nobody says ‘believe me’ unless they are lying,” and Trump uses the word “constantly.”

“It is time for you to get your groove back, media, because let’s face facts, you’ve kind of let yourself go a little bit for these past few years. Put on a few pundits.”
Jon Stewart

But Stewart had harsh words for the media as well. “Stop your whining, press,” he said, adding that the media used to be enamored over Trump, “a blabbermouth who’s as thin-skinned and narcissistic as you are.” Now that Trump “broke up,” with the press, said Stewart, “it is time for you to get your groove back, media, because let’s face facts, you’ve kind of let yourself go a little bit for these past few years. Put on a few pundits.”

The breakup, Stewart suggested, gives the media “an amazing opportunity for self-reflection and improvement.” His suggestion: “Do something for yourself. … Take up a hobby. I recommend journalism.”

The comedian, who is a Late Show executive producer, last visited the show four weeks ago to blast Trump’s “exhausting” presidency—and implore viewers that “all actions will be necessary” to survive his presidency.

He has now made six appearances on The Late Show, which is currently riding a four-week rating streak in which it has bested The Tonight Show Starring Jimmy Fallon in total viewers (however, Fallon retains the lead in the 18-49 demo).