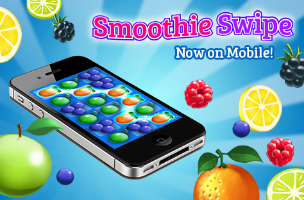 After a successful release on Facebook in 2013, Square Enix has launched its fruit-filled puzzle game Smoothie Swipe on iPhone and iPad. The game asks players to tap and drag their finger on the screen to collect groups of three-or-more fruits that touch in some way, including diagonally, in order to complete level-specific goals and earn points.

Each level of Smoothie Swipe has a different layout of fruit and different goals. Players are required to earn large amounts of points in each level, in order to earn at least one star (out of three), but may also be asked to collect a specific amount of one or more kinds of fruit, including special fruit, like lemons. Lemons only appear when clearing groups of five or more regular fruit. Therefore, players would need to create at least three lemons, and then collect those to pass these sorts of stages. Other levels may ask players to clear a required number of ice cubes from the screen by making matches next to them, as another example. Level design becomes more complex over time, with the introduction of vine-covered fruit pieces and more.

Most levels have a move limit (others ask players to complete goals within a time limit). Any moves that remain after a level’s goals have been completed are spent in the game’s “double score” mode, which sees users earning double the points per move, and hopefully unlocking all three stars for the stage. If not, gamers can replay levels to try again.

Double score mode also applies to timed levels, with players using their remaining time to earn double the points on an unlimited number of moves before time runs out. If players fail to complete a level before running out of moves or time, they lose a life. These recharge automatically over time, or can be purchased with real money.

Players have access to power-ups as they play, like a garden shovel that can be used to remove one chosen piece of fruit from the board. Another power-up, the fruit box, can be used to remove all of a single kind of fruit from the screen, while a watermelon is used to clear all fruit in a chosen row and column. These powers can be purchased with the coins (free currency) players earn after completing levels, with extra coins also being available to purchase with real money.

For social play, users can compare their scores (and brag about them) with their Facebook friends on level-specific leaderboards, and are encouraged to send their friends free lives to keep playing longer. Thanks to this Facebook connectivity and cross-platform support, existing Facebook players can login with their accounts to import their progress and start right where they left off.

Smoothie Swipe is available to download for free on the iTunes App Store. As of this writing, the game is featured as a Best New Game on the platform.