Despite posting an apology and claiming that it will “work on internal procedures,” the ripples caused by Facebook’s real-name policy spread wider and wider. More groups are being affected, and the hubbub has chummed the waters, ending in more accounts suspended in what has become a cultural cyber-war. And real-name policy is targeting the WRONG people in this reporting equation. 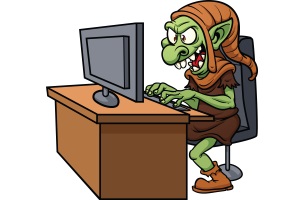 Despite posting an apology and claiming that it will “work on internal procedures,” the ripples caused by Facebook’s real-name policy spread wider and wider. More groups are being affected, and the hubbub has chummed the waters, ending in more accounts suspended in what has become a cultural cyber-war. And real-name policy is targeting the WRONG people in this reporting equation.

When Facebook started cracking down on its naming policy in September, the social network stated that a single user flagged hundreds of accounts, starting the avalanche. Those accounts primarily belonged to drag queens and members of the LGTBQ (lesbian, gay, bisexual, transgender, queer) community. Facebook apologized, fixed it, and everyone moved on, right? Not quite.

Other groups are now reporting being locked out of accounts for using fake names, again due to selective targeting of large numbers of people by individuals.

Who is this happening to?

Many members of the Pagan community are finding themselves locked out now because they changed their Facebook profiles to reflect their Pagan identities.

Another group coming under fire is professional wrestlers. From the time of Dick the Bruiser and André the Giant, wrestlers have used stage names. But some are being targeted under the same naming policy, told that they need to have their profiles under their “day-to-day” name and have fan pages for their stage names. Sound familiar? Who knew drag queens and pro wrestlers would have this much in common?

So what is the thread linking all of these issues together and the glaring omission in Facebook’s claim that it will make this right?  It’s that hundreds, if not thousands, of people can be targeted by A SINGLE USER! Some cyber-jerk with an ax to grind can literally mess with the lives of countless other people by exploiting a policy that Facebook admits it really doesn’t know how to enforce.

Facebook claims that its real-name policy is there to protect people from cyberbullying and cyber-stalking. This is a crap argument when the very policy intended to protect people is being used to completely disenfranchise entire segments of the population just because their identity isn’t the same as their name. And thousands of profiles on Facebook are fake but will never get called out on it because they have mainstream names or they’re throw-away accounts used specifically to attack others, so these users don’t care about “accountability.”

And speaking of which, how about flipping the script here, Facebook? If one person flags 100 accounts, wouldn’t a reasonable response focus on that one person, with someone at Facebook flagging THAT account for suspension/some sort of investigation — or to suggest local psychologists via ad popups to help them get over their god complex? (You’re really missing a monetization opportunity there, Facebook, FYI.)

Regardless, until there is some sort of parity with how this policy is enforced, Facebook should stop accepting naming policy complaints. Period. Slam the door shut until you can figure it out in a way that doesn’t screw with people’s lives.

And let’s not trivialize this. This is serious stuff for many people. We’ve come to depend on Facebook to reach friends, family, communities and clients, so if you’re not that place where we can do that, Facebook — fine. But figure that out soon. Or Ello — what’s that? Much of your user base might be saying goodbye. Google Plus is still an option, too. (Or just creating a forum on your own website.) The point is, there ARE options — not great options, but better than not knowing if you’ll exist online tomorrow.

One final note: If you’re an unfortunate victim of this online identity insanity, there is some small ray of hope. One of the first individuals affected by this attack, Sister Lil Miss Hot Mess, has been in contact with Facebook and has been given a work-around on how to get your name back. Mulysa Mayhem (who has been targeted TWICE now) has set up a page that has become a great resource for anyone seeking help. And you can follow along on Facebook using the #mynameis hashtag. Be sure to tag your posts about this naming controversy with that, as well!

Readers: Have you or any of your friends or family been affected by Facebook’s enforcement of its real-name policy?