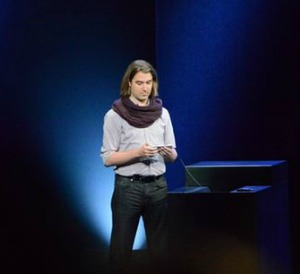 In the midst of all the excitement about the new iPhone 6 devices and the Apple Watch, there was one person who managed to steal a little bit of thunder. He’s a game developer and he took the stage to talk about something that clearly very few people cared about because I just looked at a number of stories and could not find one mention of what this man talked about.

However, there was so much chatter about that purple infinity scarf that he got a hashtag, #scarfguy, and, of course, the scarf has a Twitter handle, though there is only one lonely tweet there.

Others were quick to jump in on the joke, including Mike’s Hard Lemonade, who was hoping for an Oreo moment with this one.

Of course, nothing was going to divert our attention from the tech on display. Apple is so huge and popular, it would trump even this sort of social media talk. But there is the question of what should be done, from a PR perspective, to make sure that a speaker doesn’t take away from whatever’s being presented when the brand isn’t quite as prominent. In tech (apparently) and in fashion (for instance) making a statement with what you’re wearing is a good thing. And you shouldn’t be so bland as to fade into the background. But for the most part, you probably don’t want to overshadow all else.

BTW, if anyone caught this man’s name and what he was talking about, please feel free to mention it in the comments.