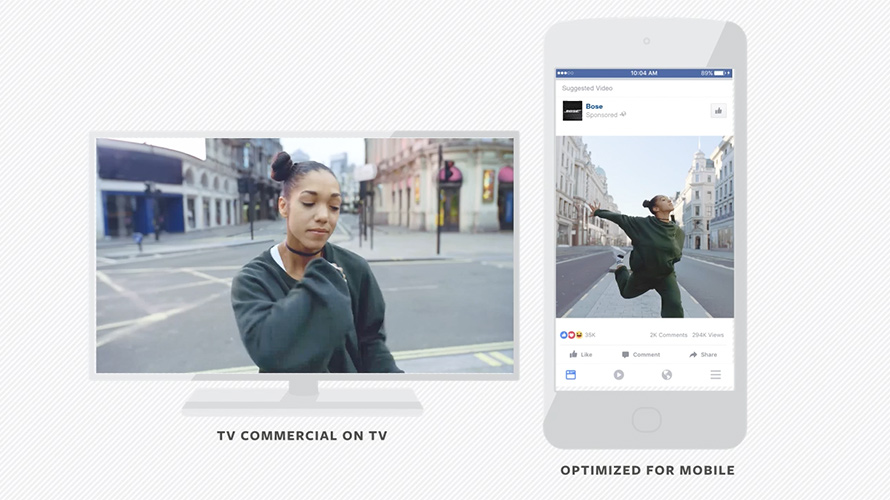 After quietly piloting a video program with brands called PockeTVC (short for pocket television commercials) for more than a year that takes existing TV assets and fits them for mobile, Facebook Creative Shop is releasing a handful of studies suggesting that ad recall is stronger when the creative is tailored specifically for mobile.

Facebook has had big goals for video for a while and advertisers are ramping up the amount of video content that they produce for the platform. However, brands are still pouring hefty budgets into producing TV assets that don’t necessarily work on mobile where consumers are increasingly watching more video.

At the same time, Facebook is reportedly working on launching original programs with media companies including BuzzFeed, Vox Media and Refinery29. The site is also working on a small test to sell ads through apps like Roku and A+E Networks.

Bose and its agency, Initiative, for example, worked with Facebook in North America to run a campaign for its noise-canceling headphones through the PockeTVC program. Bose wanted to play up noise in the campaign, but videos automatically play without sound on Facebook as users scroll through news feeds. The brand cut up a 60-second TV ad into a 10-second audio clip with frames that switched between images of someone wearing the headphones and images of the products.

Here’s a side-by-side comparison showing the TV and Facebook versions:

According to a Facebook poll that measured brand lift, the 10-second clip optimized for social increased ad recall by six points compared to the full-length version.

“Every major brand has a TV commercial, but not every TV commercial is optimized for the mobile environment,” said May Seow, global story director at Facebook Creative Shop. “Most TV commercials have a linear story arc revealing brand or benefit only at the end. If the scrolling speed of mobile is averaging at 1.7 seconds, we must fundamentally rethink the first few seconds and capture attention quickly with our most arresting frames.”