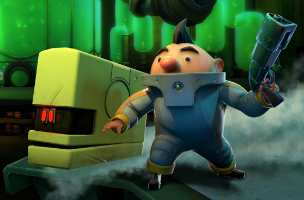 First announced in July 2014, Amazon Game Studios’ Tales from Deep Space is now available to download on Kindle Fire tablets. The game takes players to a space station called Big Moon, where they’ll jump into the shoes of traveling salesman E, alongside a luggage drone named CASI. Upon arriving on Big Moon, players discover the station’s computer system is offline and E is robbed, leading players on a mission to recover E’s stolen property. Things quickly go from bad to worse for E, as his quest turns into one of discovery, surrounding the station’s mysteries.

Tales from Deep Space is an side-scrolling action-adventure title that sees players tapping and dragging on the screen to move. Key items are marked with prompts, which can be tapped to trigger conversations with others, interactions with machines and other key items, and more. Players can swap control between E and CASI to complete certain objectives.

For instance, players may need to walk through a door that only opens if a button is pressed. Players can assign CASI to wait on the button, leaving the door open so E can walk through. Both E and CASI are outfitted with weapons, and players can tap on enemies to defeat them. If one character goes down in battle, the other can be used to revive them. If both players go down, they respawn at certain checkpoints so players can try again.

Jumping and climbing are handled by the game, and depend simply on the direction players are dragging the movement arrow on the screen. If players are ever lost, they can open the map to see their next target location marked for their reference.

Collectibles are scattered throughout each area of the game, and players receive rewards for collecting them in bulk. In addition, users unlock achievements as they pass certain story milestones (and more). Finally, exclusive to Kindle Fire HDX and 2014 model Fire tablets is the ability to play in local, two-player co-op, where each player controls one character.

Tales from Deep Space is available to download for $6.99 on the Amazon Appstore. A free prequel comic is also available from Amazon Game Studios and comiXology.