Looking for a karaoke bar in Connecticut? You’ll have to head to New Haven, where Karaoke Heroes Co-Owner Andy Lebwohl and his wife, Carly, have found harmony with Facebook advertising to help spread the word about what they called the only superhero-themed karaoke bar in North America. 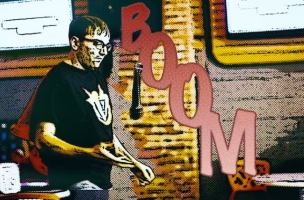 Looking for a karaoke bar in Connecticut? You’ll have to head to New Haven, where Karaoke Heroes Co-Owner Andy Lebwohl and his wife, Carly, have found harmony with Facebook advertising to help spread the word about what they called the only superhero-themed karaoke bar in North America.

Lebwohl said in a post on the Facebook for Business page that he often stopped at karaoke bars after leaving his previous job as a lawyer in New York, adding, “I’d often daydream of owning a tiki-themed karaoke bar.” After a stint in business school in New Haven, he opened Karaoke Heroes, which features custom wall art from Marvel artist Al Milgrom and a neon glowing bar.

Lebwohl described why advertising on Facebook became an option for his bar:

We needed to let people know we were here, and Facebook was by far the most cost-effective tool at our disposal. It allowed us to reach the people we wanted to reach, rather than hoping they’d look for us in the Yellow Pages or online, or hear our ad by chance on the radio.

Carly, my wife, designed our first Facebook ads. She and I would have conversations about who our customers were most likely to be, and then she’d create different ads to try to appeal to those people. One of the things we liked was that we could experiment with different Facebook ads for different audiences without spending a lot of money. Sometimes a $25 test would tell us whether the message or targeting was right.

At first, a lot of our ads were just designed to let people know where we were. We don’t have a very prominent storefront, so we’d run ads showing our neon glowing sign, so people would know what to look for on the street. Over time, we’ve gotten more advanced with our targeting and messages.

He also went into more detail on how he uses the social network’s ad-targeting features:

We can be really specific with how we target the ads. For instance, we can reach audiences of people who live in Connecticut who are interested in superheroes. That’s a simple one. We can reach moms of young children, to host parties in the space over the weekend. We can run ads to people who speak Cantonese, or Mandarin, or Spanish, to let them know about the music we have in those languages. Or sometimes we run special events, and we can advertise the bar as an event space.

Finally, Lebwohl offered advice for businesses that are just getting started on Facebook:

One of the things we like about Facebook is that it lets us work quickly. If we have an idea we want to test out, we can try it right away, and learn quickly whether it works for us. That test-and-learn approach can be really helpful for any business, especially if you’re just getting started and trying to let people know who you are.

Readers: What is your karaoke song of choice?