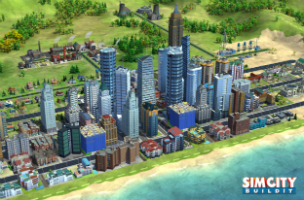 Last month, EA Mobile announced the development of SimCity BuildIt for iOS and Android devices. The free-to-play game is being specifically designed for “gamers on the go,” and will allow users to build the city of their dreams, making real choices that impact the future of their city.

In this new installment in the popular franchise, players will construct factories, build homes and commercial buildings, engage with a new crafting system, and even focus on certain specializations to keep their citizens happy, among other features.

The game is being designed alongside hefty feedback from franchise fans and players, which is helping the team create a game that addresses player expectations, while also staying true to what makes a SimCity game a SimCity game.

We had a chance to chat with Jason Willig, vice president and group general manager for EA Mobile, about the development of SimCity BuildIt, and what changes and/or similarities players can expect in this newest title in the franchise.

Inside Mobile Apps: How much variety will there be in the different kinds of buildings that will be constructed? That is, will we see the same three or four home or commercial building templates repeated over and over again, or will our towns have a larger selection than that?

Jason Willig: There are literally hundreds of building types and variants of each. We will constantly be adding new content to ensure cities look unique.

IMA: Can you explain the game’s new crafting system for us? How will players create objects, and what will they be used for?

JW: Crafting is deep, but also very intuitive: players unlock Factories where they produce “materials” like steel beams, logs, plastic, seeds, etc. Then Commercial buildings are unlocked like the Farmers Market, Hardware Store, Building Supplies Store, Gardening Supplies Store, Donut Shop, etc. Players use the basic materials they “manufacture” in their Factories in certain combinations to create crafted items in their Commercial Buildings. Those crafted items are then used to upgrade Residential Zones, sold to friends or via the Trade Depot or used for Boat Missions to earn Golden Keys (which can be used to purchase City Specialization buildings).

IMA: It looks like SimCity BuildIt will offer a quest system. What sorts of quests can players expect to complete, and what will they receive for doing so?

JW: There is a lot of directed play in SimCity BuildIt, and several quest-like elements, but we really want this game to be about what the player wants to do, not necessarily what we want the player to do. We think that element of open-ended–ness and discovery is really important to making this feel like SimCity. Our goal is to present the user with choices (not just tasks to check off), show them why those choices matter (relative to goals) and support / guide them with teaching and quests along the way.

IMA: Many mobile or social city-building games follow a similar formula. After placing a building, one is required to wait a (sometimes) lengthy amount of time for its construction to finish, making the experience feel more like a waiting game than one of actually playing. Is that formula seen here, or will buildings continue to be placed in “zones,” and then automatically evolve over time as a town’s population grows?

JW: Almost every game – even the very best ones – follow some basic formulas …shooters, RPG’s, puzzle games and city building games. Some of those formulas exist for a reason: people enjoy those design conventions and modalities of play. That said, as game makers it’s our responsibility (and pretty much the most fun thing about getting to make games for a living), to both find/embrace/make better those familiar reference points while delivering innovations that are meaningful, really unique… and fun.