She knew people were going to talk. That was the point. Duh. 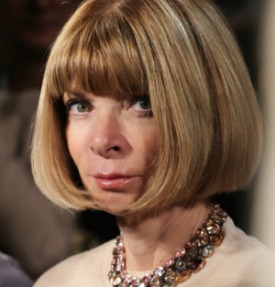 Anna Wintour sat down with former CNN reporter Alina Cho on Monday at the Metropolitan Museum to talk about a number of fashion-related topics. Among them: that Kimye cover of Vogue.

I see the role of Vogue to reflect what’s going on in the culture. The first celebrity that I put on the cover of Vogue was Madonna, and that was considered completely controversial at the time, too. It’s such a long time ago probably no one remembers, but she was a very controversial figure. Now she’s part of the establishment. I think if we just remain deeply tasteful and just put deeply tasteful people on the cover, it would be a rather boring magazine! Nobody would talk about us. It’s very important that people do talk about us.

Magazines, just like anything else, have to generate attention if they’re going to stay afloat. It’s great that Vogue is considered a “fashion Bible.” And it’s wonderful that its EIC is a celebrity in her own right who can get the kind of access to the famous and fashionable that other outlets would love to have.

But we live in a world where mass appeal is important as well. Love her or hate her, Kim Kardashian gets people talking. (Ahem.) And certainly, a lot of people were talking about Vogue when the cover was revealed.

Moreover, it is the job of a brand like Vogue to push the envelope and tap into what’s relevant. Kimye has left a mark on the fashion industry (for better or for worst) and continue to do so, from their appearances on red carpets and fashion week festivities to their own design contributions. If Vogue doesn’t pay attention to them, their competitors will.

And finally, Wintour is being honest about the utility of the occasional stunt. The magazine knows from prior experience that putting someone of questionable taste level on the cover is going to raise some hackles. With help from social media, it’s just the sort of thing that will get the magazine on a lot of timelines. No shade (maybe?), but she admits here that the couple aren’t your standard choice for Vogue. Going against the grain is both a little refreshing and a lotta good for the Vogue brand.

She also recommends that young designers work for other established fashion houses before going off on their own because social media might not be the vehicle for making your name in the fashion industry. Instagram might not be the path to greatness.