Q&A: PepsiCo’s CMOs on Why 40% of Its Super Bowl Budget Is Going to Digital 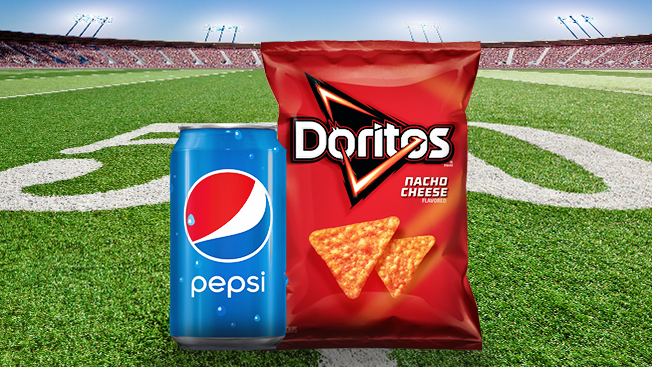 This year, Pepsi is the title sponsor of the halftime show, which features a performance by Coldplay, and Doritos will run its 10th and final "Crash the Super Bowl" contest as well as tech-savvy campaigns around San Francisco's Levi's Stadium. And new platforms like Snapchat are shifting more of the conversation to digital, where Frito-Lay and Pepsi are spending 40 percent of the company's investment in this year's game.

We spoke with Pepsi CMO Seth Kaufman and Frito-Lay CMO Ram Krishnan about what the brand has in store for Super Bowl 50.

Seth Kaufman: We are activating, not just leading up to the game and [during] the game, but also on the ground, across more brands than we have before.

As an example, Mountain Dew hasn't been in the Super Bowl for 15 years. Mountain Dew Kickstart has been a highly successful innovation—almost $400 million in retail—which is coming together with three awesome things: Dew, juice and caffeine. We're going to have some fun with that in the creative we're bringing to life, both in teasing it as we go in and also on [Super Bowl Sunday].

If you think about Crash the Super Bowl, we ask consumers to submit their ads—then we ask them to vote for the top ads, [and] consumers pick which one will actually air.

Adweek: How much of a role will digital play in your budget compared to TV?

Krishnan: Close to 40 percent of our investment will be on digital because that's where consumers are having conversations. That's not to say that we're ignoring the television screen—obviously, we're spending big dollars on the Super Bowl game day. But that itself is not enough to have a two-way conversation with a consumer.

Adweek: Which platforms will be a big push?

Krishnan: Twitter is always the platform of choice during a live event. Last year the Super Bowl [generated] 29 million tweets, but I don't think we'll stop at one platform.

Kaufman: At the end of the day, consumers are on multiple platforms during this time. So, if we can build custom stories, it really enriches the experience.

Adweek: The tie-in with Snapchat and the NFL this year is interesting. Will you do anything on that channel?

You will see activation from us across a whole host of platforms, including that one, which we all know is becoming more and more important.

Adweek: What are you doing around Levi's Stadium in San Francisco?

Kaufman: We're doing something on the ground at Pier 70, which is a tech-forward, multisensory experience where there will be concerts and really great ways to engage with our different brands.

With NFL Experience, we'll be doing things like a mixology event where consumers can experience our brand with new ingredients. Our high-tech Pepsi Spire fountains will be all over the city—in the stadium, at the Pier 70 activation, in various places throughout the broader metropolitan area.

Krishnan: We [also] have a presence in the NFL Experience. It's basically the 10 years of Crash the Super Bowl, and consumers can relive the Doritos ads and put themselves in the ad and share it with their network.

The other thing we have going on is a huge presence at the stadium. We'll have the Tostitos Cantina, and we'll have quite a bit of product within the stadium.

Adweek: For Doritos, this is the last year of the Crash the Super Bowl campaign. What's the biggest thing you've learned about the competition over the past 10 years?

Technology has been a great equalizer for creating content—literally anyone with a smartphone now can create content.

The third learning is about geographical boundaries or lack thereof. When Crash the Super Bowl started, it was U.S.-centric. We have submissions this year from 29 countries, and we only sell Doritos in 34.

Adweek: Was Crash the Super Bowl always meant to run for a set number of years? And what do you plan to do next year?

Krishnan: People wait until the last minute to load their creative, so the entire brand team and I were basically not breathing until we see the submissions come in. We didn't know that when we launched this in 2006 that this program would last 10 years.

As far as what comes next, I don't think we have the exact idea of what's next. But we've come to the realization that consumers change, and the brands have to evolve with time.

When you think about the Gen Z consumer, who are now our bull's-eye for Doritos, they're not looking for brands to act as enablers, they're already creating content—a lot have their own YouTube channels. That's part of the reason that we're evolving the program.